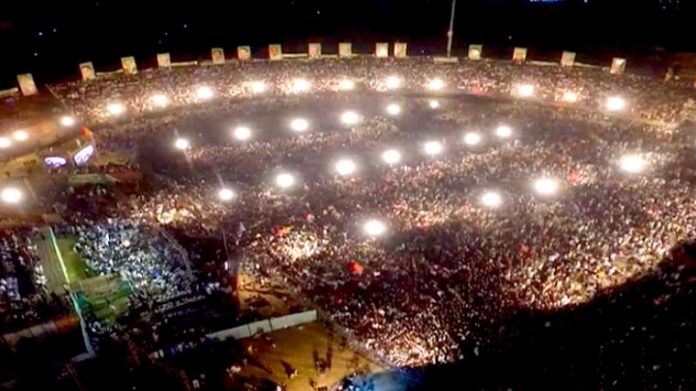 GUJRANWALA, OCT 17 – The Pakistan Democratic Movement held its first rally as part of a countrywide anti-government campaign in Gujranwala Friday in which the core message was that double standards would not cut it: there had to be accountability for anyone accused of corruption, not just the opposition.

The rally was held at Jinnah Ground where people started arriving at 3pm. The PML-N hosted the rally and organisers signed a 28-point agreement with the Gujranwala city administration in order to get permission. PML-N leader Maryam Nawaz, PPP Chairperson Bilawal Bhutto Zardari and JUI-F chief Maulana Fazlur Rehman spoke and PML-N founder Nawaz Sharif addressed the crowd via video link from London.

According to the agreement, all roads leading into the city would be opened and containers will be removed. All people who have been arrested in relation to the rally will also be released. No raids will be conducted either.However, the PDM is not allowed to block GT Road, which was their plan in case they weren’t granted permission for the rally. The rally will be held from 3pm till midnight.

SOPs
It will be mandatory for participants to observe anti-coronavirus SOPs at the rally. PDM leaders are only allowed to address the crowd in the stadium and no speeches are allowed against national security institutions or against the Constitution.

In case the agreement is not followed, a case will be registered against the rally organisers.

The organisers have constructed an 80 by 24 foot stage and set up 10,000 chairs, though they claim more people will attend. They have also hired DJ Butt, made famous for his participation at PTI rallies, for the event. One of his team members received an electric shock while setting up a screen.

A fight also broke out between workers of the JUI-F and PML-N at the venue.

The PDM, which is comprised of 11 opposition parties, has vowed to stage rallies across the country to begin a movement against the government. Rallies are also scheduled in Karachi and Quetta on October 18.

She opened her speech in Punjabi and referenced inflation and poverty. She talked about media silence and censorship. “The media has been chained,” she said. “This is the reason why nobody talks about your corruption. You say all institutions are on the same page with us. Imran Khan remember it doesn’t take time to turn a page.”

She went on to say: “When I hear Mian sahab’s speech, I get scared because I am his daughter, but respect or insult are in the hands of Allah.”

The PPP leader opened his speech thanking the PML-N for hosting the jalsa. He then went on to talk about Gujranwala’s Abdul Waheed Qureshi, Yaqoob Khokhar, Sher Mohammad, Zubair Shah, who are PPP workers who made sacrifices. “This is why aj bhi Bhutto zinda he!”

He went on to give the prices of eggs, tomatoes, onions. “Young people are going around with two degrees in their hands, but they can’t find jobs,” he said. This is crisis, not tabdeeli, he said, referring to Prime Minister Imran Khan’s election campaign slogan for ‘Change’.

“You’ll have to make one law for all Pakistanis if you want to root out corruption,” he said, referring to how some people are let of the hook. “We need across the board accountability to end corruption. If there is an accusation, then do investigate a former president, a former prime minister. But then, if there is an accusation, do also investigate a general and a judge if this is the case. Send them to jail too. Then you can say there is justice.”

You can have a hundred objections to Shehbaz Sharif, Bilawal Bhutto said. But you cannot deny he brought the BRT. What did Imran Khan do?

The JUI-F ruler continued in the same vein. “The fake rules are going to reach their logical end soon,” he said. “The democratic forces have started their movement from Gujranwala. From today, a sea of people will come to Karachi, Quetta, Peshawar and Lahore.”

The government will not see the coming December, if you show the courage, he said. “Today, 15 members of the Opposition made PM Khan run away from parliament,” he added, referring to what took place earlier in the day in Islamabad on the floor of the house.

“If they are selected and there are selectors,” Maulana Fazl said. The “selectors” do not want to be known, but how can they not been named when they have sacrificed democracy to bring someone to power. “Are the selectors embarrassed with the performance of who they selected or they are still proud of him?”

“The budgets you presented in the past two years were prepared by the IMF,” he said, pointing at the PTI government. “You are not the representative of Pakistan but an agent of some foreign power.”

“We have no fight with the army. The army is our institution. But If you leave your professional responsibilities and interfere in politics, impose your rule on Pakistan, violate the Constitution, impose martial law, occupy the rule, hold elections under your control, rig the elections then raising Kalma-e-Haq against you is nobody’s but our duty.”

Former PM Nawaz Sharif is addressing the Gujranwala jalsa via video from London. It was earlier expected that the former PM will deliver his speech last.

“I have a deep relationship with the people of Gujranwala. Some people have a desire that my voice doesn’t reach you but their conspiracies will fail,” he said.

“Gujranwala has always loved Nawaz Sharif. I am talking to you after three years. Many things have changed in the last three years. The smiling faces I left behind look gloomy today,” he said.

Nawaz asked the people in the rally if they had money for their children’s books and clothes. “Tell me, I have to know do you have money to buy their winter clothes?”

“I hear that the cost of per tola gold has crossed 110k. Will someone tell me how will a poor person’s daughter get married?” he asked, adding that the ruling PTI government used to say that they will give 10 million jobs, but about 15 million people have gone unemployed in this government.

“They said they will give five million houses. Tell me, has anyone gotten a single home? How are traders? How are they living? Are their businesses running or have they been shut down? Nawaz Sharif knows of your difficulties,” he said.

“Whose collar should we grab, Imran Khan or the ones who brought him? Who is the real culprit? Who stole your vote? How did your vote end up in someone else’s box? Why were the results of the elections stopped? Why did international organizations question the transparency of elections?” Nawaz asked.

He said a dictator was sentenced for abrogating the constitution but the court’s [verdict] was blown into pieces.

“Why are elected prime ministers never allowed to complete their five years? Have you realised how significant ‘vote ko izzat do’ is after living two years under this government?” he asked.

“They declare us traitors. This is not something new. Don’t worry, Gujranwala. The dictators have always given such medals to the politicians since Pakistan came into being” he said.

PML-N’s Shahid Khaqan Abbasi is addressing the jalsa. He said Imran Khan has failed. “The hybrid system has failed. It has failed because its foundation was weak,” he said, asking what is Nawaz Shairf’s narrative.

“Peoples vote and mandate should be respected,” he said, adding that the country will progress when it will run according to the constitution.

Former prime minister Raja Pervez Ashraf also spoke. he said they were told that Imran Khan will change the fate of Pakistan in 100 days. “We have gathered here because inflation and unemployment have broken are backs,” he said.

“You no longer have the right to be in the government. People will not tolerate your government anymore,” Ashraf said.

PPP leader Bilawal Bhutto Zardari has reached the stadium too. He is standing on stage next to Maryam and meeting supporters of the opposition parties.

PML-N leader Maryam Nawaz has reached the Jinnah Ground in Gujranwala. She is waving from stage as thousands of supporters welcome her to the jalsa

“The PML-N’s narrative hasn’t changed, but it [targeting Imran Khan] is part of the strategy,” PML-N leader Zubair told.

“In a cricket match, you have to take 10 wickets, then you completely end an innings. So the wickets will fall. Imran Khan’s wicket will also fall,” he said.

Zubair says former PM Nawaz Sharif will give the last speech at the Gujranwala jalsa.

Veteran politician Makhdoom Javed Hashmi addressed the crowd in Gujranwala around 8pm. “To run Pakistan, you will have to bow down before the country’s constitution,” he said.

“What are we demanding? We are demanding respect for our votes,” he said.