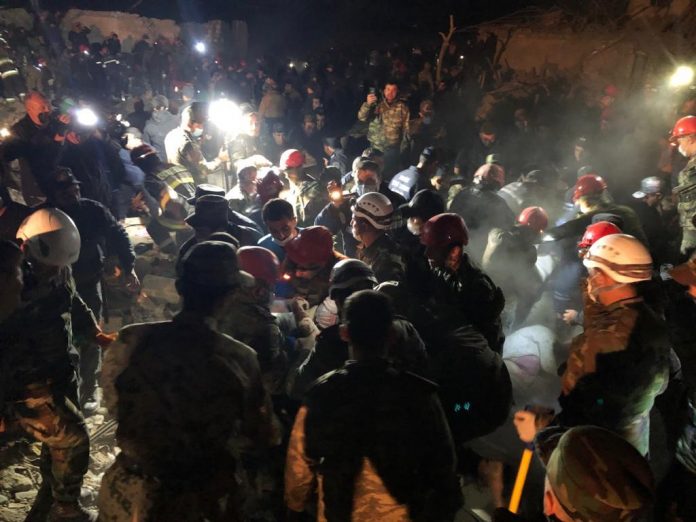 On September 27, 2020 the armed forces of Armenia, blatantly violating the ceasefire regime have launched another aggression against Azerbaijan, by intensively attacking the positions of the armed forces of Azerbaijan along the frontline, as well as by deliberately artillery shelling residential areas of Terter, Aghdam, Fuzuli and Jabrayil districts. On the following days, densely populated residential areas- Shamkir, Beylagan, Aghdam, Fuzuli, Jabrayil, Goranboy, Tartar, Barda, Aghjabadi and the city of Ganja were subjected to heavy bombardment, including with mid-range missiles.

As a result, there have been casualties among civilians and military servicemen of Azerbaijan. Extensive damage has been inflicted on many houses and other civilian infrastructure.

The new aggression by Armenia against Azerbaijan is yet another blatant violation of fundamental norms and principles of international law, the international humanitarian law, including the Geneva Conventions of 1949 and its Additional Protocols, as well as the United Nations Security Council resolutions 822, 853, 874, 884 of 1993 demanding the immediate and unconditional withdrawal of the armed forces of Armenia from the occupied territories of Azerbaijan.

As of October 04, totally 22 civilians, including children and elderly have been killed,  111 civilians have been wounded as a consequence of heavy artillery shelling.  More than 200 houses and civilian facilities, such as hospitals, schools, kindergartens, and graveyards have been destroyed as a result of the ongoing aggression.

Vehicles belonging to civilians became unserviceable, and numerous small and large horned animals and haystacks were destroyed as well. Extensive damage was inflicted upon water, energy and other civilian infrastructure.

The armed forces of Armenia do not even spare ambulances and medical facilities in a blatant violation of international humanitarian law, in particular Article 35 of the First Geneva Convention of 1949.

Of a particular concern, on October 04, heavy artillery launched from the territory of Armenia proper hit the city of Ganja, the 2nd largest city of Azerbaijan with close to 400.000 strong population. As a result, serious damage was inflicted upon private property and other civilian infrastructure. The attack left 1 dead, 32 wounded among civilians.

In order to repel military aggression by Armenia and to ensure the security of civilians and densely populated residential areas inside the internationally recognized  territories of Azerbaijan, the Armed Forces of the Republic of Azerbaijan have launched counter-offensive measures. Azerbaijan acts on its sovereign soil within the right of self-defense and takes adequate and proportionate measures in full compliance with the international humanitarian law to thwart the imminent threat to its civilian population and ensure their security.

targeted and civilians residing in the occupied territories as well as civilian  infrastructure therein will not be targeted. On October 04, the Ministry of Defense issued official appeal to those civilians calling them to stay away from the conflict zone, especially from firing points, military facilities and military infrastructure of the armed forces of Armenia. The Ministry further stated that appropriate conditions will be created for for their evacuation from the conflict zone and all their rights will be protected.1

In addition, the political and military authorities have issued several statements that the Republic of Azerbaijan has no military target in the territory of Armenia.

The following served as basis for the data presented:

Historical background of the conflict

After the collapse of the USSR, the international legal doctrine of uti possidetis juris secured the international, regional and national legitimacy of the boundaries of newly independent States. Under this legal doctrine, the former administrative  borders of Azerbaijan SSR, which had included Nagorno-Karabakh Autonomous Oblast, were recognized by international law as the legitimate borders of the newly independent Republic of Azerbaijan. This was later reaffirmed in the UN Security Council resolutions 822, 853, 874 and 884 on the conflict in and around the Nagorno-Karabakh region of the Republic of Azerbaijan.

The Armenia-Azerbaijan Nagorno-Karabakh conflict started with the Armenians` open territorial claims to Azerbaijan’s historical lands and ethnic provocations in 1988. In the early 1980s, the Armenians in the Soviet Union leadership, leaders of Armenian SSR and the Armenian Diaspora abroad exploited the weakening of the central government of the USSR to embark on a campaign to annex the Nagorno-Karabakh Autonomous Oblast to Armenia.

The United Nations Security Council adopted the above-mentioned four resolutions in 1993 in response to occupation of territories of Azerbaijan. These resolutions condemn the use of force against Azerbaijan and the occupation of its territories; reaffirm respect for the sovereignty and territorial integrity of Azerbaijan, inviolability of its international borders and the inadmissibility of use of force for acquisition of territories; confirm that the Nagorno-Karabakh region is part of Azerbaijan; and demand the immediate, full and unconditional withdrawal of the occupying forces from all the occupied territories.

The resolutions also made specific reference to violations of international humanitarian law, including the displacement of a large number of civilians in Azerbaijan, attacks on civilians and bombardments of its territory.

Since 27 years over adoption, the key demands of these UN SC resolutions remain unimplemented. At present 20 percent of the territory of Azerbaijan – Nagorno-Karabakh and 7 adjacent districts are under the occupation of Armenia. One million of IDPs and refugees fled their homes to save their lives and settled indifferent parts of Azerbaijan.

These criminal actions of Armenia have shattered the foundations of international humanitarian law and were aimed at creating a new spiral of social and humanitarian crisis by disrupting the normal life of the civilian population in areasclose to the line of contact.

Over nearly past 30 years Armenia has been pursuing the aim to consolidate its occupation of this territory and maintain the status-quo created through illegal use of force against the sovereignty and territorial integrity of the Republic of Azerbaijan accompanied by heinous war crimes, crimes against humanity, such as genocide and ethnic cleansing.

Deaths Among the Civilian Population

The armed forces of Armenia with the use of artillery, missiles shelled Shamkir, Beylagan, Aghdam, Fuzuli, Jabrayil, Goranboy, Tartar, Barda, Aghjabadi and the city of Ganja. As a result of indiscriminate deliberate targeting of densely populated residential areas 22 civilians were killed (see Annex 1) and 111 civilians were injured.

On September 27, as a result of mortar attack, 4 civilians, members of the Elbrus Gurbanov’s family, including two children were perished in the Gashalti village of the Naftalan city.

On September 28, Armenia targeted Evoghly village of the Aghdam district, as a result of which Joshgun Anvar Pashayev (1979) was killed. Mehman Sovet Aliyev (1975) was killed in the center of Tartar district of shrapnel wound. Khalig Asif Abbasov (1981) and Elshan Asif Abbasov (1987) were killed as a result of shelling of residential building in the Shikharkh settlement of the Tartar district.

On September 29, Elmaddin Humbat Sariyev (1997) was killed by shrapnel fragments falling on a medical center in Garadaghli village of the Aghdam district.

On September 30, Murad Tahir Rustamov (1990) was killed by shrapnel fragments fall near the gas station in Horadiz settlement of the Fuzuli district.

On October 01, Zabil Mahammad Hasanov (1982) was killed by shrapnel fragment that hit bus station in the center of the Tartar city. Murshud Rashid Mammadov (1966) and his son Samir Rashid Mammadov were killed in their house in Hajimammadli village of the Aghdam district.

In the morning of October 04, a civilian was killed as a result of massive missile attacks launched by the armed forces of Armenia against the densely populated residential areas of the city of Ganja, the second largest city of Azerbaijan (60 km from the frontline) from the territory of Armenia.

The artillery shelling by the armed forces of Armenia resulted in injury of 111 civilians. There are female, elderly and children among them2. The number of wounded civilians in regions of Azerbaijan is as follows:

Most of the wounded got injuries at home or being at or in the vicinity of public places (such as petrol station, court building, postal office, sport centre, etc.)

Below are some cases on wounded civilians:

The following female residents of Aghjabedi district were wounded while being at home: Saliga Avaz Bayramova (1988), Zahra Isa Guliyeva (1942) and Tahira Gardashkhan Namazova (1956).

2The total number for this category of civilians will be finalized after receiving up-to-date detailed information on injured civilians as a result of armed attack of Armenia on Ganja city.

More than 200 houses and civilian facilities have been destroyed as a result of armed attack. Material damage has been caused to private houses and apartments and other private property.

Photo 9 – 10: Private house of Tartar resident Asif Mustafayev was destroyed, while he was hospitalized with serious injuries

Photo 14 – 15: Yenikand village of the Goranboy district hit by artillery

Residential IDP settlements were also targeted inflicting serious damage on public and private property. IDPs who temporarily found shelter in these settlements waiting to return to their homes have become victim of Armenian aggression for yet another time

Photo 27 – 28: Residential building for the disabled and IDPs in Tartar was hit, two civilians died, two others wounded

Numerous small and large horned animals and haystacks of the residents of the settlements targeted by heavy artillery and mortars were destroyed.

Of particular concern is deliberate targeting of medical and educational institutions.

Photo 34 – 36: Local ambulance was targeted by artillery fire in the Tartar district, in a blatant violation of Article 35 of the First Geneva Convention of 1949. The driver was seriously wounded

The following schools were targeted and damaged by artillery attack of Armenia:

Vital civilian infrastructures, such as electricity, gas, water, communication stations have also been targeted. 10 kV Telestudio overhead line from 35/10 kV Khangarvand substation in Goranboy, and the 35 kV Gulustan and 10 kV Azizbeyov, 2nd Subartesian overhead lines from 110/30/10 kV Naftalan substation were repeatedly shot in Goranboy. The 0.4 kV distribution network in Tapgaragoyunlu is useless, repair and restoration work has not yet been possible.

35 kV Horadiz-Boyuk Bahmanli overhead line, as well as 10 kV Shukurbayli, Gazakhlar, Babi and Alkhanli overhead lines from the 35/10 kV Horadiz and Mahmudlu substation was shot in different places and then restored in Fuzuli. In Alkhanli and Shukurbayli villages, the 0.4 kV distribution network is useless, repair and restoration work is under way.

According to the latest data, the gas supply of Tapgaragoyunlu village of Goranboy remains to be limited. At present, natural gas has been supplied at more than 50% of Fuzuli region. The gas supply of 53 residential settlements, except Tartar city and 51 villages, 25 villages of Aghjabadi, a village and 5 settlements of Agdam, has been suspended.

Photo 37 – 38: Electricity and energy infrastructure damaged and settlements were cut from electricity

SECTION 3. VIOLATIONS WITH RESPECT TO CIVILIANS IN THE TERRITORIES UNDER CONTROL OF ARMENIA

There are mass media reports indicating that Armenia does not take necessary measures with a view to clearly distinguish journalists from combatants. Some photos suggest that in some instances, journalists in the theatre of active military operations also act as combatants.

Photo 39 – 41: A person claimed to be a journalist wears military uniform and holds a machin gun in his hand

(c)           of the Additional Protocol I to the Geneva Conventions, which oblige the Party to the conflict to take all feasible precautions to protect the civilian population and civilian objects under its control against the effects of attacks.

Furthermore, involvement of the children in armed hostilities indicate Armenia’s violations under Article 77 (2) of Addition Protocol I and Article 38 of the Convention on the Rights of Child prohibiting the recruitment of children into armed forces or not allowing them to take a direct part in hostilities.

The new aggression by Armenia unleashed in the early morning of September 27, 2020, has already led to severe violations of human rights:

This survey is far from being comprehensive. However, it demonstrates the range, variety and consistency of Armenia’s violations of international human rights law and international humanitarian law. Armenia bears responsibility for war crimes it has committed as a matter of the international law of State responsibility, which includes its agents and officials and those for whom it must be deemed liable by virtue of direct instruction.