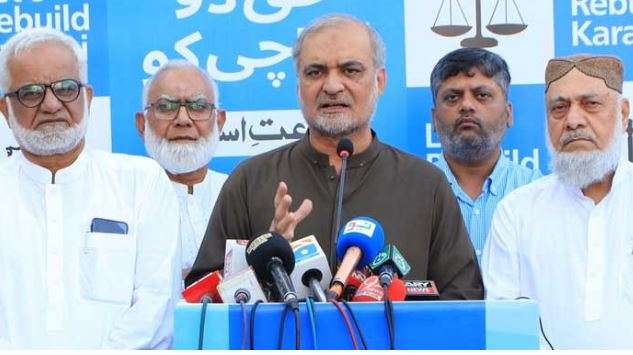 Rehman’s remarks came after the Election Commission of Pakistan (ECP) announced to the postponement of Karachi’s local body elections which were scheduled to be held on October 23.

Addressing a presser in Karachi, Rehman also accused the CEC of being biased.

“The elections were postponed due to the PDM’s joint agenda, while those responsible for conducting the polls are operating on the Zardari doctrine,” the JI president said, alleging the involvement of PPP co-chairman Asif Ali Zardari behind the deferment.

“The Sindh government did not provide any detail about the security personnel. It is not the ECP’s job to ask political parties about [conducting] elections,” he said, adding that the commission has become a “facilitator of political parties.”

“The purpose behind not conducting local government polls is to retain control over resources,” Rehman claimed.

The JI leader said that Sindh asked to postpone elections under the pretext of an inadequate number of security personnel due to the floods.

“When we asked where the troops are stationed, the CEC said that it was not our position to keep asking. You [CEC] are acting as the Sindh government’s facilitator. It is better that the CEC resigns,” Rehman remarked.

Earlier today, the ECP postponed local body elections in Karachi which were scheduled to take place on October 23. The commission stated that it will review the situation again after 15 days.

The decision came after the Sindh government informed the electoral body about the unavailability of the police force for security during the polls due to floods.

“Election Commission made every effort to hold local bodies polls in Karachi and a meeting was held with the secretary interior a day prior in this regard,” the ECP said, adding that the ministry was asked to ensure the availability of the army and Rangers for security.

However, following a lack of police personnel, the Rangers and army cannot be deployed at polling stations and will only be available as a uick Response Force when needed.

The commission shared it had no option but to postpone the local government elections in Karachi for the time being.