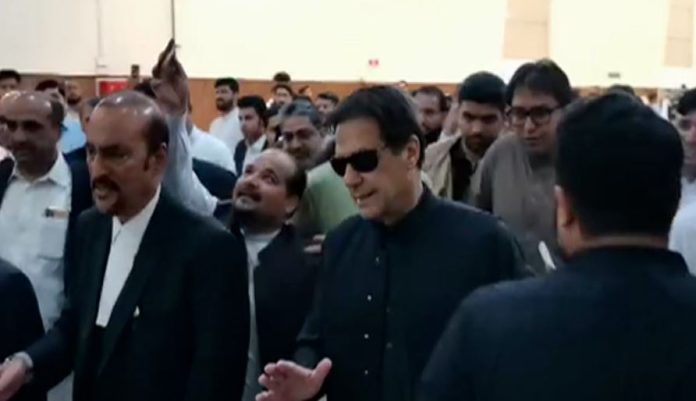 After the PTI chairman ended his march, Imran and other leaders of his party were booked in 14 cases registered at multiple police stations across Islamabad over allegations of arson and vandalism in the capital.

Today, a petition was filed in the court by Imran’s counsel Babar Awan, which was heard by PHC Chief Justice Qaiser Rashid Khan.

The judge granted the PTI leader bail till June 25 and subsequently forwarded the orders to the additional sessions judge of Islamabad.

The bail was approved against surety bonds worth Rs50,000. Imran was instructed to appear before the Islamabad sessions court before June 25.

In the petition filed on Thursday, a copy of which is available, the PTI chairman contended that the party’s march on May 25 was a peaceful demonstration.

“The present illegitimate imported government used unreasonable and unlawful tactics along-with state machinery against the peaceful empty-handed protesters throughout the city,” it said.

Imran contended that the Supreme Court (SC) had also taken notice of the “excessive use of force” by the government, including road blockades, chemical shells of tear gas, baton charge, firing, shelling, rubber bullets and shotguns which “tore apart” the fundamental rights of the people.

The SC, the petition continued, had also instructed the authorities to immediately released all the party members who were arrested.

“However, the police and state in derogation and utter violation of the decision of the Supreme Court did not act.”

It further stated that the FIRs were registered in “pitched enmity” of the government/state against PTI.

The registration of FIR is “concocted and result of an afterthought, a conspiracy against fundamental rights under the freedom of association, movement and expression”, it added.