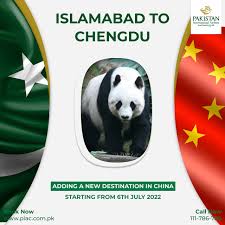 Chengdu, the capital city of Sichuan, China, is the third destination other than Beijing for which PIA recently got operating licences from the Civil Aviation Administration of China (CAAC).

In March, PIA said that CAAC had allowed it to operate flights for Chinese cities of Xi’an and Guangzhou from Pakistan. Previously, the state-run airline was allowed to conduct flight operations for Beijing only. CAAC has also allowed PIA to operate chartered cargo flights for Kunming and Shenzhen while approval for flights for Kashgar (Xinjiang Uygur Autonomous Region) is under process, the airline said.

According to the schedule, Flight Number PK-870, the first flight for the new destination, will take off from Islamabad Int’l Airport at 8 am on July 6, which will touch down at Chengdu Shuangliu Int’l Airport at 4 pm local time after a flight duration of approximately 4 hours and 40 minutes.

The same day, Flight Number PK-871 will depart from Chengdu at 6 pm local time and will reach Islamabad at 8:20 pm local time after a flight of 5 hours and 20 minutes.

PIA has attributed the launch of weekly flights to a new destination in China to Pak-China friendship and China-Pakistan Economic Corridor (CPEC).

The new direct flights are expected to enhance trade and education cooperation between Pakistan and Sichuan, which already have multiple linkages. Pakistani students studying in China have also expressed their pleasure over the development.