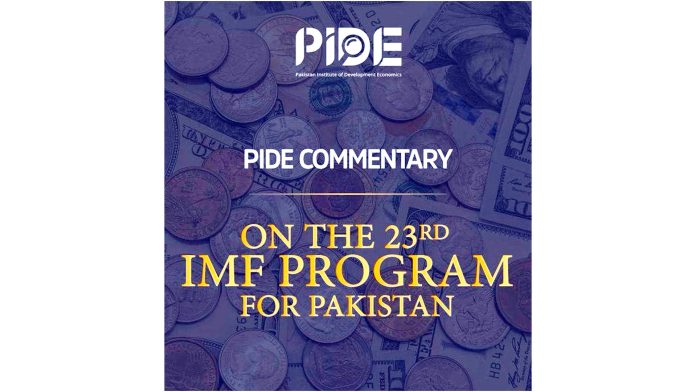 Islamabad, Sep 25: /DNA/ – International Monetary Fund (IMF) issued a staff­ report on the seventh and eighth reviews of the extended arrangement under the Extended Fund Facility (EFF) on September 1, 2022. As per the review report, the authorities of Pakistan are allowed to draw USD 1.1 billion, keeping in view the measures taken by authorities to address fiscal and external challenges. The IMF board has also approved the extension of the EFF till June 2023 along with extra Special Drawing Rights (SDR) of 720 million, bringing the total access under the EFF to about USD 6.5 billion.

This was stated by Dr. Nadeem ul Haque, Vice Chancellor, and Dr. Durre Nayab Pro Vice Chancellor of Pakistan Institute of Development Economics (PIDE), during a meeting with a group of senior journalists here in Islamabad. They said that the review report has also identified some priority measures to be considered by the Pakistani authorities, such as the implementation of an approved budget, market-determined exchange rate policy, proactive and prudent monetary policy, the expansion of the social safety net, and structural reforms related to the performance of state-owned enterprises (SOEs) and governance. The set of measures that have been identified contains both short-term and medium-term measures to promote long-term growth. In this regard, the Pakistan Institute of Development Economics (PIDE) has also been working extensively to identify the measures that are necessary to remove the bottlenecks in the economy to improve productivity and increase growth. Therefore, the objective of the PIDE Report is twofold, i.e., a commentary on the measures suggested by the review report and what other measures should be part of the program.

Dr. Nadeem ul Haque said that the PIDE reform agenda (RAPID) noted that Pakistan needs a sustainable growth rate of around 8 percent over a long period, given the population pressure. However, the review report showed that the economy of Pakistan started overheating at a growth rate of around 6 percent. PIDE noted that this is primarily due to the economy’s low investment rate and a worsening long-term trend of investment as a percentage of GDP. Additionally, there are substantial regulatory and productivity constraints in the economy that the program should be addressing.

He said the review report also suggested that the State Bank of Pakistan (SBP) will continue a tight monetary policy per the standard prescription to restrain higher inflation expectations. According to the review, the SBP and the IMF staff­ agreed to a tight monetary policy to achieve a positive real interest rate. However, the real rate remains negative! And the real rate is likely to remain negative through the program period. This implies that the nominal interest rate should be 20 percent or even more. However, it would be challenging for the SBP to curtail inflation through monetary tightening due to the following facts:

Speaking at the occasion, Dr. Nayab said that the PIDE has substantial work on tariffs and regulations, which should be included in future programs, and the real estate sector that goes far beyond the program document. Therefore, rather than trying to curb the sector’s activity and treat it as a pariah, the need is to create a real estate market.

She said that Pakistan has suff­ered for 75 years from a violent campaign against corruption, which is hard to disentangle from the ongoing power struggle. The National Accountability Bureau (NAB) and other investigative agencies have hurt more innocent people than caught criminals. Unfortunately, most of our anti-corruption campaigns have been political in nature. Such campaigns have also led to very intrusive officialdom and documentation. All of this has eroded our social capital and scared away investment. Due to this campaign, decision-making is paralyzed, and risk-taking has ceased.

She further said that while the attention to financial sector health is welcome, financial sector reform finds little mention in the review report. PIDE noted that small banks would either close down or merge with larger banks, so the competitiveness of the banking system needs to be considered.

According to the PIDE’s report on IMF’s current program, the review report projects a 47 percent reduction in the current account deficit in FY-2023, with the deficit shrinking from USD 17.3 billion in FY-2022 to USD 9.3 billion in FY-2023. These projections are based on the assumed increase in the export bills by USD 3.2 billion and a USD 3.3 billion decreases in the import bills. Furthermore, the projections also assumed adherence to the ‘market-based’ exchange rate. Now the question arises, what will be the real eff­ective exchange rate (REER) given that we have imposed bans, regulatory duties, surcharges, extreme foreign exchange controls, and heavy foreign exchange interventions?

According to the press release issued from the PIDE Islamabad office, the circular debt first broke out in 2006. Since then, this is the third IMF program focusing on a deteriorating circular debt with little impact. We always emphasize increasing prices and passing on the burden to consumers without worrying about structural losses. PIDE notes that tariff­ increases without structural changes can increase inefficiencies and sector losses. Consumer-end tariffs are highly sensitive to the losses in the transmission and distribution systems and bill recoveries. Per unit increase in price by Rs. 1 adds to an additional loss of more than Rs. 10 billion.

While talking with the Senior Journalist in Islamabad, PIDE’s leadership said that only increasing tariff­s has not resolved circular debt or power sector inefficiencies. The power sector needs serious decentralization of decision-making and management overhaul. Technical issues, such as line losses and bill collection, need to be resolved locally by the local management.

State-owned distribution companies (DISCOs) are corporatized but only on paper; it is unclear under which law the DISCOs are governed. Over the years, the government’s footprint on the sector (power division) has become more significant instead of decentralizing power.

PIDE suggested that unless all companies are made responsible and accountable for all their decisions and finances, it would not be possible to bring efficiency to the power sector. These companies need independent boards with zero influence from bureaucracy.

The billing system has to be decentralized and carefully targeted with technology-based pre-paid smart meters. Pre-paid smart meters will also bring transparency to billing, eff­ective demand management, and commercial efficiency to distribution companies.

Furthermore, social protection has become a political instrument. The expenditures on social protection observe an increasing trend and stand at around Rs. 316 billion in the review report. While well-meaning, the program is seeking further expansion along with indexation.

Perhaps there is a need to undertake a critical review of this whole system and seek consolidation and productivity gains. In addition, these schemes have no concept of graduation or mobility. Conceivably this is indicative of the economic pessimism in the country. PIDE noted that the overlapping expenditures for social protection under different public schemes are not considered.