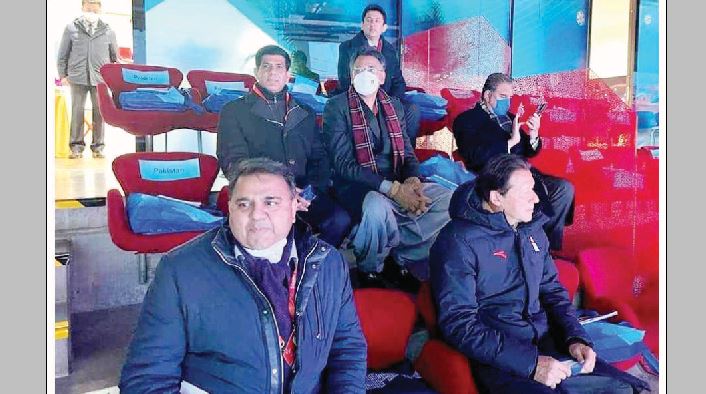 BEIJING, FEB 5: /DNA/ Prime Minister Imran Khan’s four-day visit to China is very significant and it would not only inject a new impetus to the all weather strategic cooperative partnership but take the ironclad friendship between the two countries to the new heights.

These views were expressed by Federal Minister for Information and Broadcasting, Chaudhry Fawad Hussain here on Saturday.

Both countries already enjoy important all weather strategic cooperative partnership and now we are moving towards close cooperation in sports and culture, he told APP.

He said that Imran Khan in his separate meetings with President Xi Jinping and Premier Li Kekiang, would discuss ways and means to further strengthen the all-weather strategic cooperative partnership especially the economic cooperation between the two countries.

Sharing detail of the visit of the Prime Minister and his delegation, he said that Prime Minister Imran Khan’s presence at the splendid opening ceremony of the Beijing 2022 Winter Olympics fully demonstrated Pakistan’s support and solidarity with China, he said and added, it also fully reflected the special feelings of the Pakistani people for their Chinese brethren.

Chaudhry Fawad said that the Pakistani contingent participating in the athletes’ parade in the National Stadium received a very warm welcome and applause from thousands of the Chinese spectators.

The moment the Pakistani contingent entered the arena waving the national flag, it was given a big applause by the Chinese people after their own country’s contingent. “It showed their regard and affection for Pakistan”, he added.

He informed that during the visit, the Prime Minister held a series of meetings with the executives of Chinese state-owned and private corporate sectors and invited them to invest in Pakistan and benefit from the business-friendly environment and policies offered by the present government.

About current progress on the China Pakistan Economic Corridor (CPEC), a flagship project of Belt and Road Initiative (BRI), he said that it provided shortest land route between Western China and Pakistan. Gwadar port had been connected with the rest of the country through highways and motorways. “We are taking measures to shift industries from China to this trade route which is very important for Pakistan. It will not only enhance the industrial production but also create a number of job opportunities in the country,” he added.

The minister said that both Pakistan and China shared similar views on regional and international issues and both countries wanted durable peace and stability in Afghanistan.

The Prime Minister had been drawing attention of the world community towards difficulties of Afghan people and he would also discuss this important issue with the Chinese leadership during his meetings. Over 40 million people in Afghanistan were facing instability for decades as a result of war needed immediate humanitarian assistance, he added.

Regarding promotion of winter sports in Pakistan, he said that Prime Minister Imran was the first Pakistani leader who attended any Winter Olympic games. Pakistan’s Northern Area having world’s highest peaks was suitable for winter sports including skiing. “A comprehensive plan was being chalk out by the government of Gilgit-Baltistan (GB) in an effort to make the northern areas a hub of winter games,” he said.