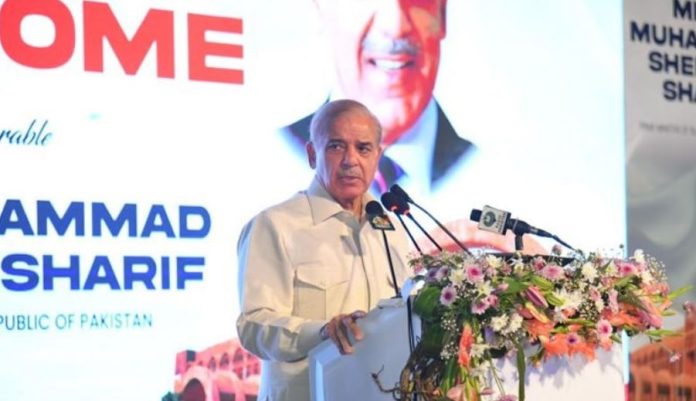 Lahore: Prime Minister Shehbaz Sharif on Sunday called for a “grand dialogue” between all stakeholders over vital sectors of the economy for the nation to progress.

Addressing the inauguration ceremony of Indus Hospital in Lahore, the PM said that a consensus should be developed over the national economy in such a manner that it “should not be disrupted with changes of governments”.

He opined that there were certain sectors of the economy like IT and industrialisation through which the country could move ahead.

The prime minister underlined that those stakeholders should think “above themselves and their personal likes and dislikes” and accord top priority to the progress and prosperity of the nation.

He said no one should have permission to do politics on health, agriculture etc. “You need to see the bigger picture, you will have to kill your ego for the nation’s prosperity,” he added.

The “grand dialogue” on economy mirrors the premier’s calls for a “charter of economy” he has made in the past, most recently on May 27. He lamented that he made the proposal “nearly four years ago but my proposal was rejected with disdain”.

He had said the charter was imperative so that no government could use the economy for the sake of politics, adding that he would reach out to all political parties for dialogue on the matter.

In his talk today, PM Shehbaz said nations were not formed by building magnificent buildings, but hard work, integrity and sacrifices coupled with knowledge and the latest technology.

The prime minister maintained that a “country cannot survive on debt”.

Comparing Pakistan’s export volume with Bangladesh, he said its annual exports now touched the $40 billion-mark while Pakistan’s was $27-28 billion annually.

He lamented that Pakistan should have been at the forefront of the Islamic world in terms of progress and development.

The prime minister said his government increased petroleum prices “with a heavy heart”.

He also termed the previous government’s decision of decreasing petroleum prices in the month of March a “ploy” as “they had not extended any kind of relief to the masses during their rule”.

The prime minister, however, promised that his government would try its best to provide relief to the poor and said that it was looking to ease the impact of the price hike by extending financial relief to 70 million people.

About loadshedding, the prime minister said that he had chaired an emergency meeting yesterday in which he ordered a mechanism be developed to decrease its duration.

He said the previous PTI government failed to arrange the purchases of oil and gas — two components, he said, that were mainly used in the production of power — and now the prices of these items very high in the global market.

He also hinted at announcing further austerity measures in the face of economic challenges.