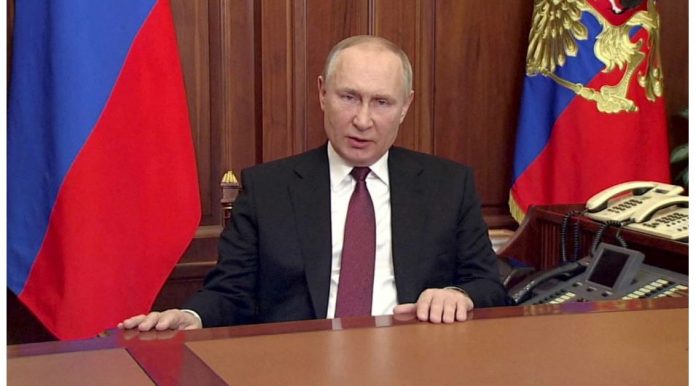 MOSCOW: Russian President Vladimir Putin warned on Sunday that Moscow will strike new targets if the West supplies long-range missiles to Ukraine and said new arms deliveries to Kyiv were aimed at “prolonging the conflict”.

If Kyiv is supplied with long-range missiles, “we will draw the appropriate conclusions and use our arms […] to strike targets we haven’t hit before,” Putin was quoted by Russian news agencies as saying.

In extracts of an interview to be broadcast late on Sunday on Rossiya-1 television, Putin did not specify exactly which targets could be hit nor the exact range of the missiles to which Moscow would react.

But his comments came just days after the United States announced it would supply Ukraine with Himars multiple launch rocket systems.

Himars is a mobile unit that can simultaneously launch multiple precision-guided missiles up to 80 kilometres away.

Military experts say that the range of the Himars systems is slightly longer than that of similar Russian systems, meaning Kyiv’s forces could strike enemy artillery while keeping out of Moscow’s reach.

US President Joe Biden has nevertheless ruled out supplying Ukraine with systems that could reach as far as Russia, despite Kyiv’s repeated demands for such weapons.

Putin said that there was “nothing new” in the weapons supplied by Washington to Kyiv, and that Ukrainian forces had at their disposal weapons “similar to Soviet- or Russian-made systems”.

The range of the missiles did not “depend on the system itself, but on the missiles used,” the Russian leader continued. “From what we know and understand today, they are systems using missiles with range of 45-70 kilometres”.

Putin said that the sole aim of the West supplying arms to Ukraine was “to prolong the conflict for as long as possible”.