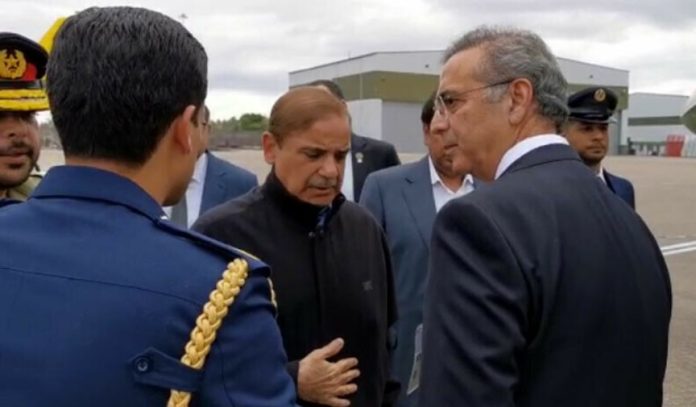 LONDON: Prime Minister Shehbaz Sharif on Monday departed for New York to represent Pakistan at the 77th session of the United National General Assembly (UNGA), which will be held from September 20 to September 26.

The premier attended the final rites of Queen Elizabeth II in London earlier in the day. He met King Charles III during a reception hosted by the latter for visiting dignitaries.

After attending the funeral, the PM left for New York and is expected to arrive later tonight. He will be received by Pakistan’s Permanent Representative to the UN Munir Akram, Pakistan’s Ambassador to Washington Masood Khan and other senior officers at the John G Kennedy International Airport.

A meeting with President of the European Union Council Charles Michel and participation in the Global Food Security Summit to be hosted by the president of Senegal and the African Union will also be on the PM’s agenda.

Besides meeting with the UNGA president, the prime minister would also attend a dinner reception to be hosted by US President Joe Biden.

On September 23, the prime minister would address the UNGA session, where his speech will focus on challenges faced by Pakistan in wake of the recent climate-induced catastrophic floods in the country.

This year’s General Assembly is particularly significant because this will be the first in-person summit of world leaders at the United Nations since 2019. The 2020 and 2021 sessions were converted into virtual meetings because of the Covid-19 pandemic.