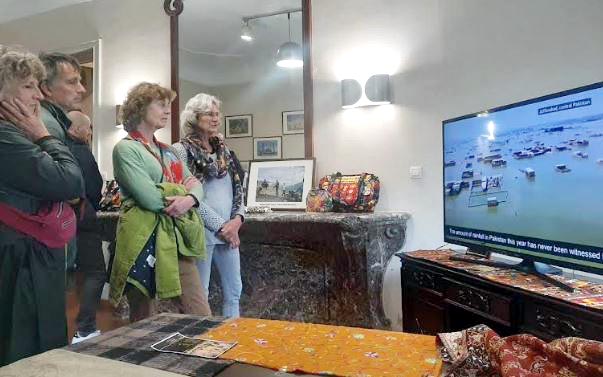 Brussels, Sep 19: The Embassy of Pakistan, Brussels joined the much-awaited event on the cultural calendar of Belgium by partnering with Urban Brussels to mark the 2022 edition of the annual Heritage Day.

This year’s Heritage day on September 17 and 18 coincided with the 75th diamond jubilee of Pakistan’s independence in August 2022.

The Ambassador of Pakistan to Belgium, Luxembourg and the European Union, Dr. Asad Majeed Khan inaugurated the day-long activities at the premises of the Embassy.  The Embassy of Pakistan had lined up an array of cultural displays depicting rich culture and heritage of Pakistan along with traditional Pakistani street food.

A briefing about the situation resulting from the climate change induced flash floods across the country was also arranged on the occasion. A special video presentation about the devastation caused by the floods and ensuing relief and rescue efforts was also played for the visitors.

Since 1989, the Heritage Days have been one of Belgium’s most keenly anticipated cultural events. This year Urban Brussels invited the diplomatic missions to participate in the  event for the first time. Accordingly, the Pakistan Embassy Brussels participated in the “Heritage Day” to showcase Pakistan’s culture and heritage to visitors from Brussels, Wallonia and Flanders regions of Belgium.

The visitors deeply appreciated the warmth and hospitality extended by the Embassy officials.