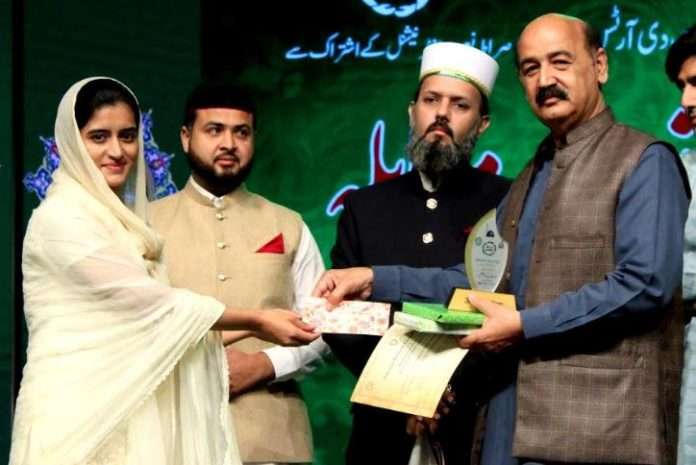 ISLAMABAD, OCT 15 /DNA/ – Pakistan National Council of the Arts has organized its 1st National Naat Competition at PNCA’s Auditorium. In view of modifications in naat recitation deviating from its original forms and traits, PNCA has taken initiative to promote naat recitation through competitions, workshops and programs.

In the series of its plans, PNCA has organized national naat Competition in three categories of girls and boys (age 12-17 years) in Category I, Boys from age 18-25 years in Category II and Girls from age 18-25 years in Category III.  Naat is the poetry written for praise of Hazrat Muhammad (P.B.U.H) and was commenced in the life of the last Messenger of Allah, Hazrat Muhammad (P.B.U.H). In the subcontinent, Naat recitation has evolved from the 11th Century onward.

Now naat recitation has become a tradition and a part of our culture. Naat is written and recited to describe good deeds, characteristics and noble life of our Hazrat Muhammad Mustafa (P.B.U.H). This competition was organized in collaboration with Madni Hussaini Naat Council & Academy and Siraat-e-Naat International, the renowned organizations working for promotion of naat and training the students in naat recitation. Waqar Hussain Madni, renowned naat khawan and teacher of hundreds of students of naat khawani has rendered his services to make the competition successful.

Ms. Salma Khan, founder of Siraat -e Naat International is also committed to promote naat recitation in women. The competition went successful, was highly acclaimed. Out of 75 contestants, 49 contestants were selected in all three categories for the final round of competition held on 15th October, 2022. The occasion was graced by Mr. Noor Muhammad Jarral, pride of performance and Syed Salman Konain, Peer Badshah Gul, Sajjada nasheen Mohra Sharif and other eminent personalities of the twin cities. Mujataba Badhshah Gul, Sajada nasheen of Mohra Sharif appreciated initiative taken by Pakistan National Council of the Arts, contribution of Waqar Hussain sahib towards his noble cause of teaching naat recitation to the students in the love of the last Messenger of Allah, Hazrat Muhammad (PBUH).

Certificates and publications on naat were distributed by Mr. Mohammad Ayoub Jamali, Director General Pakistan National Council of Arts  to all participants of the competition. DG PNCA has announced to hold a national naat competition every year to revive the original forms and features of Naat recitation. He thanked and congratulated every participant, guests and collaborators and requested to pray to Allah to ease sufferings of flood affected.