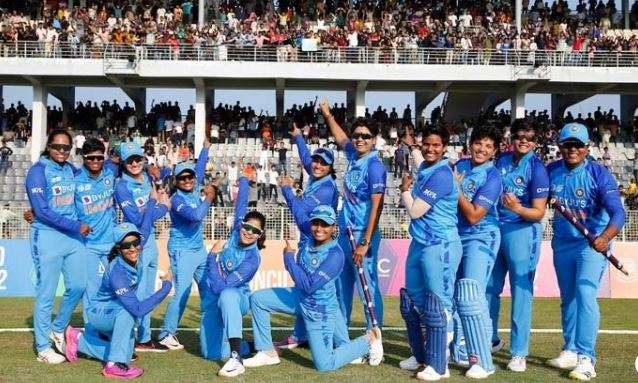 SYLHET, OCT 15 – The Indian women’s cricket team has become the Asia Cup 2022 champion for the seventh time as they continued their dominance in the tournament.

The Indian team registered a cakewalk win over Sri Lanka in the final of the 2022 edition by 8 wickets. For her brilliant performance with the ball, Renuka Singh Thakur has won the man of the match award, while Deepti Sharma has been named the Player of the tournament for her all-round show during the tournament.

In the final match, the Sri Lankan side won the toss and chose to bat. SL openers Chamari Athapaththu and Anushka Sanjeewani came out to bat. But they soon inflicted a blow when their captain Athapaththu ran out in the third over itself.

It could not go any well for the Lankan batters and they kept losing wickets. The track assisted the spinners but not to the extent that the scoreboard showed. Renuka Singh scalped three wickets, while Rajaeshwari Gayakwad and Sneh Rana picked two scalps each.

Sri Lanka toiled towards fifty and managed to play the complete 20 overs but the target was too meagre to be a worry for the Indian team. Coming out to bat, the Indian team chased the target inside 9 overs and clinched their seventh title of the continental cup.