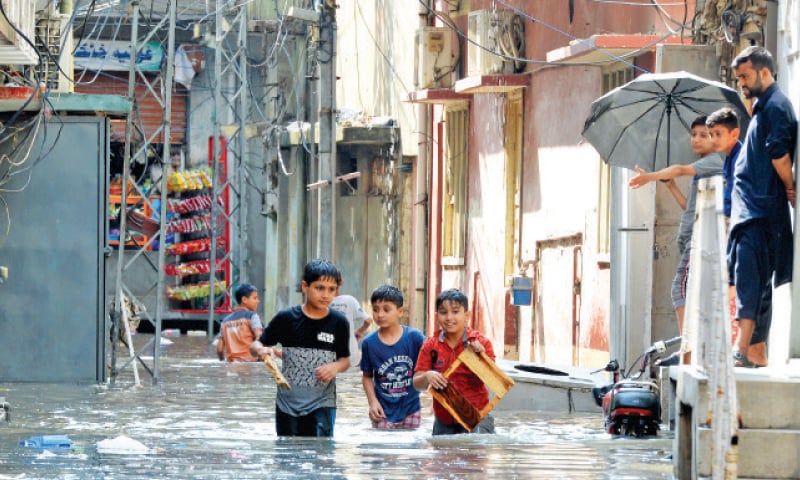 RAWALPINDI, Jul 28 Pre-alert was issued here on Wednesday morning as water level was rising in Nullah Lai after heavy rainfall.

According to district administration spokesman, all the authorities concerned were directed to remain alert and later evacuation alert was also issued, advising the authorities to take all necessary action to cope with any emergency situation particularly in low lying areas of the city.

He informed that pre-alert is issued when water level reaches 11.4 ft at Kattarian and 8.3 ft at Gawalmandi.

WASA spokesman informed that the authority was on high alert after water level in Nullah Lai continued to increase.

The downpour has caused rise in Nullah Lai water level.

Keeping in view the alarming, the authorities had canceled the holidays of Water and Sanitation Agency (WASA) officials and alerted the people.

The authority was put on high alert to deal with any emergency and flash flood in Nullah Lai during monsoon season.

The spokesman said, under rain emergency enforced for the period of June 15 to Sept 15, WASA staff on the directives of Managing Director WASA, Raja Shoukat Mehmood, would remain alert and heavy machinery would also remain in the field during monsoon season.

The authorities concerned had finalized a plan which included cleaning of sewerage lines, annual cleaning of Nullah Lai as well as inspection of WASA machinery and monitoring possibility of floods, he said adding, the agency had completed first phase of ‘Nullah Lai’ cleanliness project besides finalizing all the arrangements for monsoon season.

He informed that the agency had completed the cleanliness project to protect the city areas particularly low-lying from flash flooding.

The Nullah from ‘Katarian to Rialto’ Bridge Murree Road had been cleared and all critical points of the nullah were especially focused under the dredging and de-silting project, he said.

The cleaning of small and big drains and nullahs of the city was completed by the Municipal Corporation and Rawalpindi Waste Management Company (RWMC).

The agency on the directives of the MD WASA had completed the operational preparations for monsoon season, he said.

WASA had finalised a monsoon plan and all necessary arrangements were completed to cope with flash flooding during monsoon season, he added.