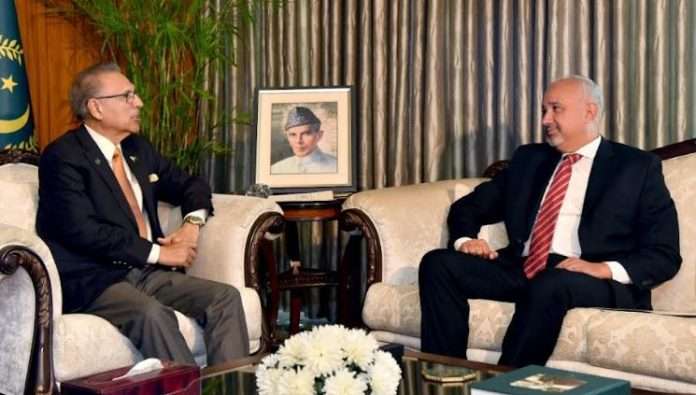 Islamabad, OCT 17 /DNA/ – The President has urged the need for early finalization of the Comprehensive Economic Partnership Agreement (CEPA) with the UAE to enable Pakistan to increase its exports, adding that Pakistan also needs to explore new avenues in economic diplomacy and investments with UAE. He said that bilateral trade between Pakistan and UAE could be further increased from its current level of USD 10.6 billion to make it commensurate with our excellent relations and close geographic proximity. He made these remarks while talking to Pakistan’s Ambassador-designate to UAE, Mr. Faisal Niaz Tirmizi, who called on him, at Aiwan-e-Sadr, today.

The President highlighted that there was huge potential for cooperation between the two countries in the field of renewable energy, commercial, industrial, infrastructure development and hospitality sectors. He noted that 1.6 million strong Pakistani diaspora in the UAE was an asset and was playing a significant role in the progress and development of the two countries. He said that the remittances sent by the Pakistani diaspora stood US $ 5.814 billion in 2021-22 which hugely helped Pakistan to overcome its foreign exchange requirements.

The President conveyed his gratitude to the UAE government for providing assistance to the flood victims in Pakistan, which included 57 humanitarian assistance flights and 2 ships carrying relief goods from UAE. He appreciated the support of UAE to Pakistan at FATF and IMF and the deposits made by the Government of UAE to the tune of US$ 2 billion to enhance Pakistan’s liquidity and foreign exchange reserves. While expressing his satisfaction over the Foreign Direct Investment of US$ 2.9 billion made by UAE in Pakistan, he said that there was a need to increase this investment in the coming years.

The President asked the Ambassador-designate to create digital linkages of the Pakistani diaspora with the online higher education institutions of Pakistan like AIOU and Virtual University to help them improve their digital skills and also take up high-value courses to enhance their capacity and skills level, which would help them in improving their income. He especially highlighted the DigiSkills Training program of the Prime Minister, which could be promoted among the diaspora in order to equip them with the requirements of developed economies.

The President also advised the envoy to sensitize the UAE leadership with regard to increasing cases of Islamophobia in Indian society and their pursuit of Hindutva, which was endangering the lives of minorities, especially Muslims.