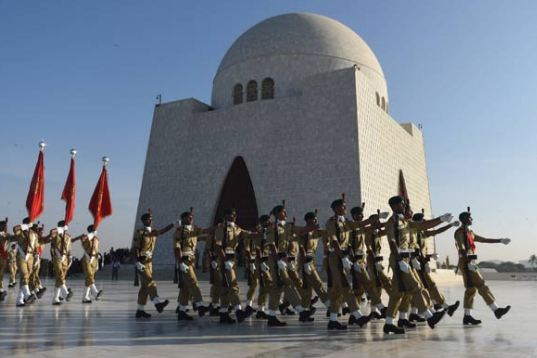 KARACHI, Dec 25 (APP): President Dr Arif Alvi on Sunday visited the mausoleum of the father of the nation, Quaid-e-Azam Mohammed Ali Jinnah, and paid rich tributes to him on his 146th birthday anniversary.

He laid a floral wreath and offered fateha.

The president also prayed for the development and prosperity of the country.

He, later, inked his impressions in the book of visitors.

While talking to media persons, he said the nation should follow the guiding principles of Quaid-e-Azam Mohammed Ali Jinnah for the development of the country.

He said that the Quaid was well aware of the misbehavour and maltreatment meted out to minorities, including Muslims in the subcontinent.

Dr Alvi said the poet of the east, Allama Iqbal, dreamt of Pakistan and Quaid-e-Azam struggled for its real existence. The President said that the dream came true through the struggle of the father of the nation.

He said, ‘We have to pursue Quaid’s guiding principles for the development of the country.’

He advised the nation to follow Quaid’s principles of unity, faith, and discipline.

He said that their real destination was to develop the nation as per Quaid’s vision.