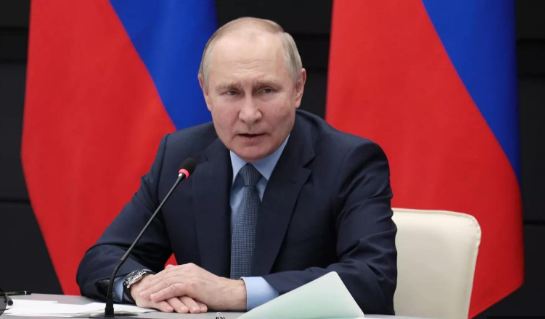 MOSCOW: President Vladimir Putin said Russia was ready to negotiate with all parties involved in the war in Ukraine but that Kyiv and its Western backers had refused to engage in talks.

Russia’s February 24 invasion of Ukraine has triggered the most deadly conflict in Europe since World War II and the biggest confrontation between Moscow and the West since the 1962 Cuban Missile Crisis.

There is, thus far, little end in sight to the war.

The Kremlin says it will fight until all its aims are achieved while Kyiv says it will not rest until every Russian soldier is ejected from all of its territory, including Crimea which Russia annexed in 2014.

“We are ready to negotiate with everyone involved about acceptable solutions, but that is up to them — we are not the ones refusing to negotiate, they are,” Putin told Rossiya 1 state television in an interview aired on Sunday.

Putin said Russia was acting in the “right direction” in Ukraine because the West, led by the United States, was trying to cleave Russia apart.

“At the core of it all is the policy of our geopolitical opponents, aiming to tear apart Russia, the historical Russia,” Putin said. “They have always tried to ‘divide and conquer’… Our goal is something else — to unite the Russian people. “

He added, “I believe that we are acting in the right direction, we are defending our national interests, the interests of our citizens, our people. And we have no other choice but to protect our citizens,” Putin said.

Putin further said he was “100 percent” confident that his forces would destroy the Pentagon’s most advanced air defence system that US President Joe Biden has promised to send to Ukraine.

“Of course we will destroy it, 100 per cent!” Putin said, referring to the Patriot missile battery.