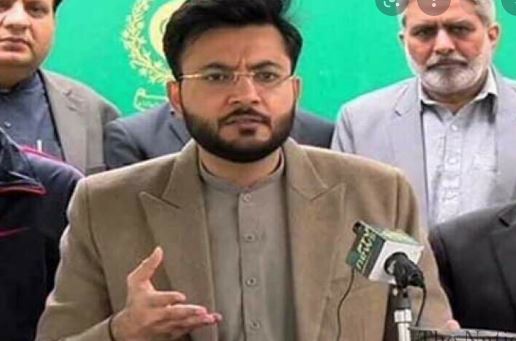 Says political opponents fell into a pit dug for PTI

ISLAMABAD: /DNA/ – Pakistan Tehreek-e-Insaf (PTI) Central Secretary Information Farrukh Habib said that the political opponents have fallen into the pit they dug for the PTI, as the party cannot be banned in the prohibited funding case but they are unlikely to avoid the punishment because they don’t have the evidences and receipts of their foreign funding.

Speaking at a press conference here on Tuesday after Election Commission of Pakistan (ECP) reserved its verdict in PTI prohibited funding case, he said that the election body concluded hearing of PTI’s prohibited funding case, which was the only political party that laid the foundation of political fund raising.Farrukh Habib said that despite serious reservations regarding Chief Election Commissioner (CEC) Sikandar Sultan Raja, the PTI was expecting impartial and unbiased decision, as the PTI submitted all evidences and banking transection pertaining to the case.He said that it was not a case of foreign funding but of prohibited funding; therefore banning PTI in the case was out of question; however, he added that it would be litmus test for the other political parties to prove their innocence, as they did not have the record of their foreign funding.

He asked the ECP to direct its scrutiny committees to submit audited reports of bank accounts relating to foreign funding of Pakistan People’s Party (PPP) and Pakistan Muslim League-Nawaz (PML-N) and gave a verdict in the light of the Supreme Court (SC) and Islamabad High Court’s (IHC) decisions.Farrukh Habib recalled that late Benazir Bhutto, in her book, had alleged that Nawaz Sharif had received funding from Osama Bin Ladin to topple her government. He demanded that ECP should announce the decision related to the party’s funding cases of all political parties simultaneously.

He lamented that the commission should show special interest in the other political parties’ foreign funding cases likewise PTI, as the PPP and PML-N cases have been pending for the last four years.Farrukh Habib demanded that the CCP should conduct open of their cases so as to expose their real face before the masses, adding that both the parties were running away from foreign funding cases because they had nothing to show with regard to their foreign funding.PTI Secretary Information stated that Fazal Rehman-led JUI-F received funding from Libya, as it was evident from the ground-breaking plank of the seminary, adding that the party should submit the receipts to the Commission.

Lashing out at the flawed and anti-public policies of the imported government, Farrukh Habib said that the cabal of crooks amended the NAB law to trash their corruption cases.He said that after amending the law, the corrupt gangs would now further accelerate their corruption drive to plunder the national wealth with impunity.He said that gravity of the situation could be judged from the fact that dollar was flying high and rupee was depreciating rapidly due to which the miseries of the inflation-ridden masses increased manifolds since the imported government seized the power through conspiracy. He said that Pakistan cannot afford political and economic instability; therefore snap polls were the sole antidote to the prevailing untold crises.

Speaking on the occasion, PTI’s counsel Shah Khawar said that PTI cooperated with the electoral body fully and provide each and every evidence to the body during the last around seven years.He said that a lot of political propaganda was hatched that PTI resorted to the delaying tactics and hiding the evidences to avoid the ban; however, he added that the ECP rejected all such false and agenda-based impressions.He said that ECP set up the scrutiny committee for probe the foreign funding but to check some irregularities in the funding, adding that others political parties were also facing the issue of irregularities in their funding as well.PTI’s counsel expressed optimism that they presented the case well and submitted all related materials and evidences; hence quite hopeful of positive outcome.He said that the CEC categorically stated that the cases of other political parties would be taken to logical ends; hence now their turn to provide their evidences and receipts of their foreign funding.