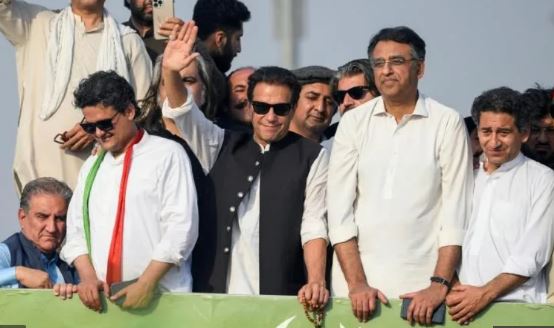 ISLAMABAD: /DNA/ – Pakistan Tehreek-e-Insaf (PTI) has filed a petition in the Supreme Court seeking permission for a second long march to Islamabad.

The petition, filed by PTI Secretary-General Asad Umar, named the interior ministry, Islamabad inspector-general and others as respondents.

PTI Chairman Imran Khan had abruptly announced the end of his ‘Azadi March’ on March 26 and had given the PML-N government a six-day ultimatum to announce a date for a general election. He had later said he called the march off due to fear of bloodshed.

The petition filed in court today argued that the court should order that PTI be allowed to hold peaceful protests and gatherings in Islamabad and no obstacles should be put in the way of PTI protests in any city.

It said the court should order that no PTI worker or leader should be arrested or tortured, intimidating tactics against PTI and raids on houses should not be carried out and the movement of people shouldn’t be stopped.

The petition seeks that the court order that no force be used against the participants in the protest and sit-in.

Former Prime Minister Imran Khan has called for protests in Islamabad in case the government does not announce elections.

Nine questions have been raised by the PTI in its petition submitted to the SC. They are:

‘Govt taking such steps to break the country’: Asad Umar

Meanwhile, Asad Umar, while talking to the media outside the apex court, said that the government is taking such steps to break the country. “It wants to create a divide between the Centre and provinces,” he said. He went on to say that the party has raised questions related to basic rights provided in the Constitution of Pakistan.

He asked which law restricts the citizens from staging a peaceful protest.

The politician said that the incumbent government raided the house of Allama Iqbal’s daughter-in-law, Justice (retd) Nasira Iqbal while thousands of PTI workers were arrested before the ‘Azadi March’.

He said that protesters coming from the entire country were stopped from marching toward the capital city.

“Hundreds of thousands of people took to the streets despite government’s worst violence,” he said.

Umar said that PTI has filed the plea to seek permission for another march in advance.