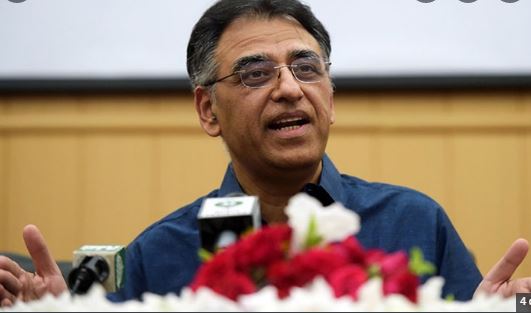 ISLAMABAD, July 25 (DNA): Former federal minister Asad Umar said on
Monday that Pakistan Tehreek-e-Insaf (PTI) has no objection to the
formation of a full court Supreme Court bench in cases related to the CM
Punjab election.

Supreme Court of Pakistan has rejected the government’s petition for
formation of a full court bench to hear the case of the Punjab chief
minister’s election.

CJP Umar Ata Bandial said that the court needs more legal clarification
on certain things to decide about the formation of full court. The CJP
also said that he was unsure whether the decision on the said ruling
will be made today.

Mazari’s lawyer, Irfan Qadir said he was instructed to speak regarding
the formation of the full court only; therefore, he needed time to take
instructions from his client. Separately, Hamza Shahbaz’s counsellor
Mansoor Awan also sought time to take instructions for arguments on
merit.

Meanwhile, Justice Ijazul Ahsan remarked that the apex court wanted to
hear the matter of the deputy speaker’s controversial ruling on merit
before deciding about forming the full bench.

However, Law Minister Azam Nazeer Tarrar asserted that there was enough
clarification in this regard. He added that if the review petition is
approved that there will be no need for a run-off election.

Presenting his arguments, advocate Irfan Qadir added that when
allegations are levelled against the judges that similar bench is formed
repeatedly then these charges can be rejected by the formation of a full
court.

It is pertinent to mention here that Pervaiz Elahi secured 186 votes
against 179 votes of PML-N’s Hamza Shehbaz. However, Mazari had
dismissed PML-Q’s 10 votes after party head Chaudhry Shujaat asked them
to vote in favour of incumbent chief minister Hamza Shahbaz.