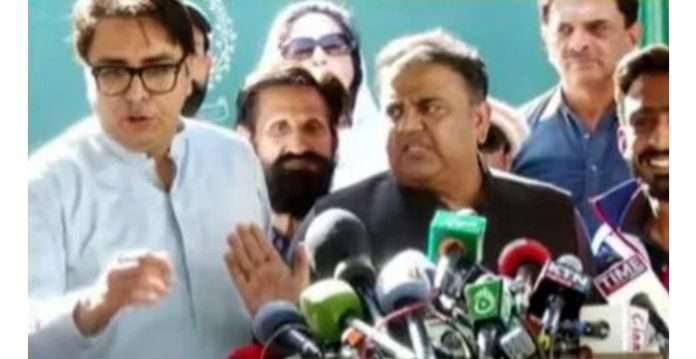 ISLAMABAD, OCT 21: PTI leaders on Friday exploded at the Election Commission of Pakistan (ECP) for disqualifying party chairman Imran Khan from political office after his lawyers failed to prove he was not guilty in the Toshakhana reference case.

The case was filed by the ruling coalition earlier this year before the election commission. The gifts also included expensive wristwatches given by a royal family.

Reactions poured in from all sides after the ECP’s tribunal reached the conclusion that Khan had illegally sold state gifts presented to Khan by heads of foreign countries and important personalities.

Speaking to media outside the courthouse, PTI leader Fawad Hussain Chaudhry said ECP’s attitude had always been the worst. “We never pinned any hopes on it.”

“This is a shameful decision. They have disgraced the 220-million-strong-nation.”

Chaudhry termed the decision as an assault on the institutions of Pakistan and called on PTI cohorts and the public at large to come out for protests against this outrage.

He went on to say that the commission had given the verdict they had hoped for. “They are only targeting Imran Khan,” he said.

The PTI leader said that the ECP and its members are not competent to make this decision. “Who are you [ECP] to take a this decision?” he questioned.

Khan, who has denied the charges, was accused of misusing his position to purchase and sell gifts received during state visits abroad that were worth over 140 million Pakistani rupees ($635,497.05). The tribunal will deliver a detailed ruling later in the day.

Former special assistant to the prime minister Shahbaz Gill said that the decision was taken by a servant of Nawaz Sharif.

“Nawaz Sharif has written this verdict and his menial worker has signed it and announced it,” he added.

He said that the verdict was to be announced at 2pm and before that, all the gates were closed and media wasn’t allowed inside. “If this decision was a justified one then what were they scared of?” he questioned.

“This decision is written by a fugitive and the nation rejects it,” Gill said.

PTI leader Asad Umar also condemned the decision as a travesty of justice.

“The verdict will soon be challenged in the court and their dream of ‘minus-Imran-Khan’ will never come true,” Umar said in a message on his Twitter handle.

An enraged Shafqat Mehmood of PTI also gave his anger a vent on Twitter.

“History also tells us that popular leaders cannot be removed from peoples consciousness through disqualifications or any other coercive action. Imran Khan lives among the people and these ridiculous decisions cannot stop him,” Mehmood said in a Twitter post.

PTI’s Babar Awan on Twitter said the decision against Imran Khan is unconstitutional and an attack on the foundation of Pakistan.

“The captain outplayed the mafia eleven in the open field and they cannot avenge their defeat from behind closed doors.”

“The country is rapidly being pushed towards a collision course,” Awan added.

PTI’s firebrand leader Murad Saeed also took to Twitter and claimed the ECP members were coerced into taking a verdict against Imran Khan.

“Everybody knows about the ECP’s controversial role, but who was that person who twisted the arm of the members to disqualify Imran Khan,” Saeed said adding, “One of the ECP members informed us that if something happened him then these ‘people’ would be responsible for it.”

In August 2022, National Assembly Speaker Raja Pervaiz Ashraf sent a reference to the ECP under Articles 62A, 63A, and 223, seeking former prime minister Imran Khan’s disqualification in the light of the Toshakhana scam.

The disqualification reference was filed by Ali Gohar Khan, PML-N’s Mohsin Nawaz Ranjha, and five others.

The 28-page reference identified 52 gift items of Toshakhana received by the former prime minister Khan, violating the law and rules, taken away at nominal prices and most of the gifts were sold in the market, including some precious watches.