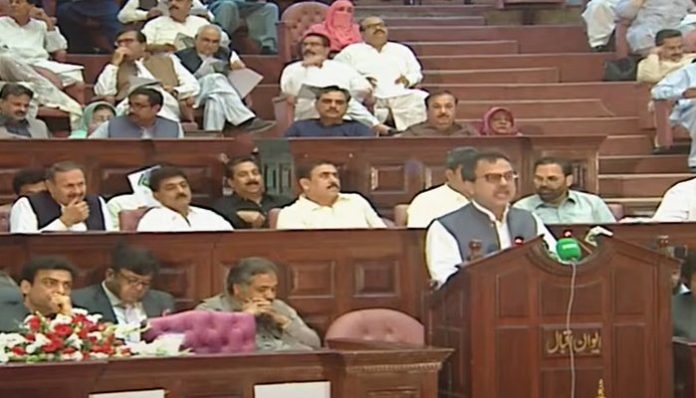 LAHORE: The Punjab government on Wednesday presented the budget for the fiscal year 2022-23 after much delay but at a different venue than the conventional one as the treasury and Opposition benches failed to reach a consensus over convening a session.

The Opposition and the government convened two separate sessions at the Punjab Assembly and the Aiwan-e-Iqbal, respectively. The former’s session started today but has been adjourned till 1pm tomorrow, while the ongoing session started after 4pm.

The Opposition was irked and demanded that the inspector-general and chief secretary be present during the session. As a result, the two sides could not develop a consensus over the issues.

Presenting the budget proposals, which were earlier approved by the cabinet, Laghari criticised the previous PTI-led government, saying its policies stalled development in the province for the last three years.

“Data shows that during the period 2019-22, there has neither been a single development programme worth mentioning nor has the province witnessed any social welfare programme,” he said, blaming the PTI government for “wasting their three years in framing false cases” against the opposition.

Recalling the last budget of the PML-N government for the fiscal year 2017-18, the provincial finance minister highlighted that at the time, the country’s GDP growth was rising at a steady pace and that the per capita income had reached $1,629.

He added that foreign investment was pouring in as Pakistan was declared an investment-safe country, the stock market was the second-best in Asia and international institutions were recognising Pakistan’s growth.

The provincial minister accused the PTI-led government of not paying attention to the energy issues which led to other issues including unemployment, poverty, inflation, etc.