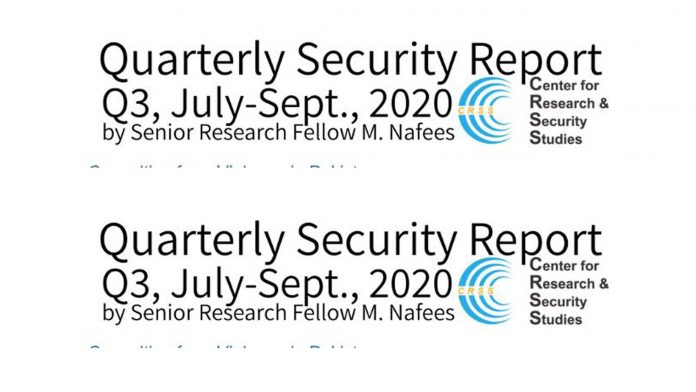 Casualties from Violence in Pakistan

A total of 132 fatalities from violence were recorded during the third quarter of 2020 with 162 people injured. Nearly 58% of the total fatalities were recorded in Khyber Pukhtunkhwa (KP) (including former FATA)[1], while Balochistan had the next highest number of fatalities (23), followed by Sindh (19), Gilgit Baltistan (GB) (7), Punjab (6), and Islamabad Capital Territory (ICT) (1). While Punjab and Islamabad appeared to be the least affected by violence, KP and Balochistan were the worst affected regions of the country.

Most troublingly, reports appeared in the press warning of the resurgence of Tehrik-e-Taliban Pakistan (TTP) in the former FATA region and its possible reappearance in Karachi (table 01).

A marginal drop in violence (5%) was observed during this quarter, but the number of wounded persons was higher this quarter compared to the previous one (162 in Q3 versus 46 in Q2, an increase of over 350%). The reasons for this are discussed later in the report (table 2).

Both July and September recorded higher number of fatalities while August witnessed a significant drop on average (table 03).

North Waziristan and Karachi remained atop the list of districts in terms of fatalities from violence.  South Waziristan, Killa Abdullah, Nowshera, Rajanpur, and Awaran experienced a sudden uptick in fatalities from violence. All provincial capital cities except Lahore, the provincial capital of Punjab, remained relatively peaceful for both quarters in a row (table 04).

One suicide attack took place during this quarter which caused injuries to three soldiers in the Ladha area of South Waziristan on 12 August 2020, but no intended fatalities. All other forms of violence remained almost as fatal as they were in the last quarter, with the exception of encounters of security personnel with criminals which left 13 outlaws dead as compared to 22 in last quarter. Although the fatalities from bombs, Improvised Explosive Devices (IEDs), landmines, and hand grenade explosions were 22 persons, the wounded were 138. This is the main reason for the escalation in the number of wounded persons this quarter compared to the previous one (table 05).

Sindhudesh Revolutionary Army (SRA), an insurgent group from Sindh, remained active during this quarter and caused two deaths in Karachi – one former Ranger in Sachal and one activist of Jamaat-e-Islami (JI) in Gulshan-e-Iqbal who was taking part in JI’s rally on Kashmir Day.

Balochistan Liberation Army (BLA), an insurgent group from Balochistan, became active during this quarter and targeted three army personnel in Panjgur on 15 July 2020.

Afghan militants from across the border also carried out attacks on security check posts in the Bajaur area of KP.

About 50-60 drug smugglers in the bordering areas of Balochistan, suspected of having links with militant outfits, also carried out armed attacks on Anti-Narcotics Force (ANF) in Mashkhel and killed two personnel.

A policeman was gunned down in a targeted attack in Korangi Industrial Area on 19 September 2020 and the TTP claimed responsibility of this attack. All together five policemen were killed in Karachi in target attacks during this quarter and it is suspected that the remaining four attacks were also carried out by TTP. These incidents are considered a sign of TTP’s return to the metropolitan city of Karachi and there is a possibility of more attacks in the future (table 07), especially after the merger of several of their formerly splintered factions.

The number of militants and insurgents that were reported to have been eliminated during security operations were 32 in this quarter. Prominent among them were five insurgents from Balochistan Republican Army (BRA), followed by Balochistan Liberation Front (BLF) (4), TTP (4), Lashkar-e-Jhangvi (LeJ) (1), and several others who were not identified.

Among the civilians who lost their lives to violence, several of them belonged to minority religious communities and some of them were affiliated with religious parties and organizations. The army personnel were more frequently targeted during this quarter than the policemen. Of the 42 security personnel, 26 were from Pakistan Army, Frontier Corps (FC), ANF, and Rangers while the remaining were from the police force (table 08).

KP and Sindh had major incidents of sectarian violence during this quarter while Balochistan and Punjab experienced very few incidents (table 09). It was also quite alarming to see hate-filled sectarian rallies in the largest city of the country (Karachi), as well as the federal capital, a few miles from the parliament.

There was a sudden upsurge in sectarian violence in the country. During the last quarter, only one fatality from sectarian violence was reported as compared to 9 fatalities during this quarter. Shia community was hit the hardest. A Christian and an Ahmadi were killed in Peshawar, and one person from the Shia community was killed in D.I. Khan, and two in Kohat. In Karachi, a person belonging to Shia community and another from Shia Ismaili community were targeted while a Hindu doctor was killed in Tando Allahyar. In Khuzdar, Balochistan, one Hindu businessman was the victim of target killing while four people were injured in an IED explosion near a mosque in Quetta (table 10).

[1] FATA has been merged with KP but we still maintain its data separately because it was and still is the main hub of militancy.