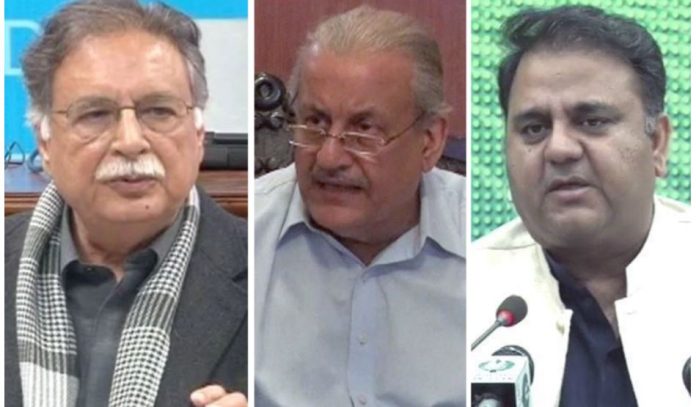 ISLAMABAD, JUN 4: Leaders of the two largest political parties in government and opposition — PML-N and PTI — agreed on Saturday that the country’s premier spy agency, the Inter-Services Intelligence (ISI), should be under civilian control and answerable to the parliament after the PML-N-led coalition government gave the agency legal cover to screen civilian officials.

PML-N leader and former information minister Pervaiz Rasheed said on Twitter that if the ISI was being tasked with vetting civilian officials, then the spy agency should be placed under civilian control and be answerable to parliament.

Former information minister and PTI leader Fawad Chaudhry agreed with Rasheed and said that if “institutions wanted to increase their role in civilian affairs, then they would have to pay for it in the form of public accountability”.

“The institution (ISI) has to think about what role it wants to play in Pakistan’s politics. A discussion is needed on the new roles of civil institutions and institutions after the media revolution,” he tweeted.

Rabbani, in a statement, said the additional task of screening civil servants before their induction, appointments, postings and promotions would “overburden” the ISI, keeping in view the situation on the eastern and western borders, internal terrorism and related issues.

He said the move indicated a lack of confidence in the civilian apparatus of the state and “also blurs the distinction between the civil and military bureaucracy”. The Constitution as well as the Civil Servants Act, 1973, were comprehensive laws and did not require screening of civil servants, he noted.

“The courts have in some judgements disregarded intelligence reports in such matters. Civil servants are already working under the pressure of the NAB (National Accountability Bureau) law,” Rabbani noted.

These statements come after an Estab­lishment Division notification, issued on June 2, stated:

“In exercise of powers conferred by sub-section 1 of section 25 of the Civil Servants Act 1973 […] read with notification No. SRO 120 (1)/1998 […] the prime minister is pleased to notify Directorate General Inter-Services Intel­ligence (ISI) as [the] Special Vetting Agency (SVA) for verification and screening of all Public Office Holders (Officers Category).”

The quoted laws — i.e. sub-section 1 of section 25 of the Civil Servants Act as well as SRO 120 — empower the prime minister to amend or make rules for the civil bureaucracy.

By issuing the notification, the government has given legal cover to a practice that had already been in place, but had not been formalised as part of protocol.

A senior official from the Establishment Division earlier told Dawn on the condition of anonymity that the ISI and the Intelligence Bureau (IB) both send their reports about civil servants before the latter are posted on important assignments.

Reports are especially sent to the Central Selection Board (CSB) at the time of promotion of bureaucrats. The practice has continued even though superior courts had, in a few cases in the past, discarded such intelligence reports while noting that there was no legal provision in the Civil Servants Act that mandated agency screening of civil servants.

According to the official, notwithstanding the notification, the IB will continue to send its reports as per routine. The official said that since the government has now given legal effect to reports issued by the ISI, and these could henceforth be used in courts as a valid legal document.

However, a former Estab­lish­ment Division secretary disagreed. He noted that though the prime minister has the power to amend or make rules for the bureaucracy, it would have been better if the Establishment Division would have issued a Statutory Regulatory Order (SRO) to amend the Appointments, Promotions and Transfer (APT) Rules governing the civil bureaucracy if it wanted to give the ISI formal charge of the vetting process.

“Unless the rules are amended, a mere notification will not legitimise the agency’s report and it cannot be used as a valid document during judicial scrutiny,” he said.

It is worth noting that clearance from intelligence agencies is not only an integral part of the promotion process for civil servants, but it also plays a key role in the appointment of judges to the superior judiciary. The Judicial Commission of Pakistan, headed by the chief justice, considers intelligence reports at the time of the confirmation and elevation of a Supreme Court judge.