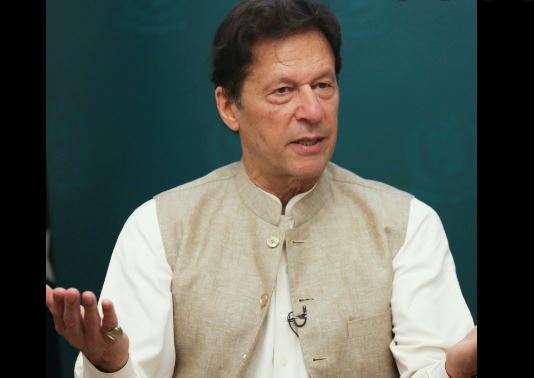 Says US wanted bases to use Pakistan to own advantage

ISLAMABAD: /DNA/ – Pakistan Tehreek-e-Insaf (PTI) Chairman Imran Khan said that those imposed on Pakistan through ‘US regime change conspiracy’ have no interest in the country because they were just looting and plundering the national wealth. Speaking at a seminar titled ‘Regime change: Impact on politics, security and economy’ organized by Islamabad Policy Institute (IPI) here on Friday, Imran Khan said that these crooked people were just committing corruption and fled the country, as they have nothing to do with the country and its people.

Imran Khan said that they come back to the country by striking NROs to clear their corruption cases, adding that they again gave themselves a clean-chit in Rs. 1,100 billion corruption cases under a NRO-2 by amending NAB laws.PTI chairman said that Pakistan had suffered the most because of this regime change conspiracy, as today we are being enslaved. That was the reason, there is an ongoing debate about what has happened to this country, because these thieves plunged the country into a quagmire.PTI chairman said that the Economic Survey testified that the economy was flourishing during PTI era, as the agricultural industry and other sectors were improving.

He raised question as to why PTI government was removed under an external conspiracy.“We are told that our government is not capable of reining in the price hike,” he added. However, Imran Khan said that the incumbent government unleashed a wave of inflation in short span on three months. PTI chairman questioned that whom to be blamed for the unprecedented price hike that the nation was currently paying in the form of inflation and load shedding? He said that everyone worried about the situation of Pakistan’s dwindling economy, fearing creating Sri Lanka like economic turmoil in the country, which could cause national security problem.He said that military security was one thing but economic security was as important, adding that if economy collapsed the neutral would also suffer.Imran Khan said that the US wanted bases in Pakistan to use Pakistan to its own advantage. “If it continues as it is now, then Pakistan has no future,” he warned.