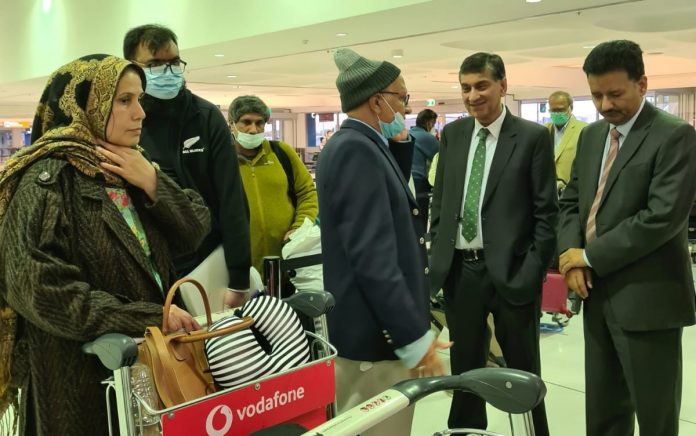 Repatriation of stranded Pakistanis from Australia

High Commissioner for Pakistan, Babar Amin, and Consul General Sydney Mohammad Ashraf were at the Sydney airport to see-off and facilitate smooth departure of thePakistanis.

The Consulate General Sydney, set up a fully functional field office at the airport to facilitate the passengers in case of any passport or visa issues at the last moment.The passengers mostly included Pakistanis who had been visiting their family members, international students and temporary residents in Australia who were stranded due to the sudden closure of international flight operations in the aftermath of pandemic outbreak.

Speaking on the occasion the High Commissioner, reiterated the resolve of the Government of Pakistan to look after the needs of overseas Pakistanis especially those stranded abroad in keeping with the vision of Prime Minister of Pakistan and the guidelines of the Foreign Minister. He added that the repatriation flights from Australia were a part of such efforts.

The Pakistanisboarding the special repatriation flight expressedhappiness to be able to return home and thanked the High Commission and its Consulates for making it possible despite logistic and commercial difficulties. They also acknowledged the efforts being made by the Pakistani Missions in Australia for the welfare and wellbeing of the Pakistan diaspora during these difficult times, owing to the COVID 19.