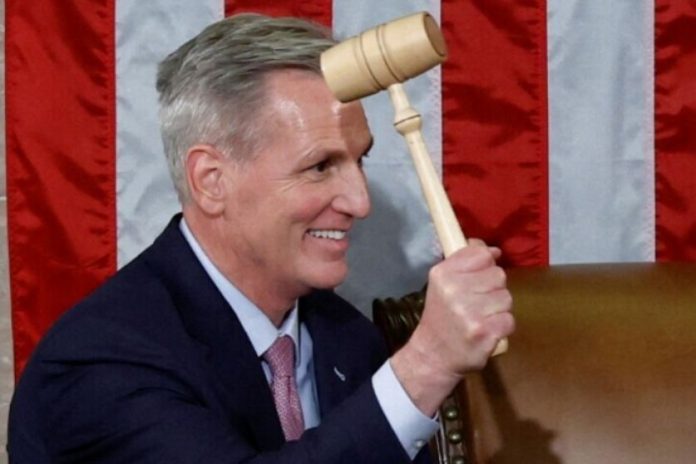 Republican Kevin McCarthy was elected speaker of the US House of Representatives on Saturday after making extensive concessions to a group of right-wing hardliners that raised questions about the party’s ability to govern.

The 57-year-old Californian suffered one final humiliation when Representative Matt Gaetz withheld his vote on the 14th ballot as midnight approached, prompting a scuffle in which fellow Republican Mike Rogers had to be physically pulled away.

McCarthy’s victory on the 15th ballot brought an end to the deepest congressional dysfunction in over 160 years. But it sharply illustrated the difficulties that he will face in leading a narrow and deeply polarised majority.

He won at last on a margin of 216-212. He was able to be elected with the votes of fewer than half the House members only because six in his own party withheld their votes — not backing McCarthy as a leader, but also not voting for another contender.

As he took the gavel for the first time, McCarthy represented the end of President Joe Biden’s Democrats’ hold on both chambers of Congress.

“Our system is built on checks and balances. It’s time for us to be a check and provide some balance to the president’s policies,” McCarthy said in his inaugural speech, which laid out a wide range of priorities from cutting spending to immigration, to fighting culture war battles.

McCarthy secured the gavel only after agreeing to a demand by hardliners that any lawmaker is able to call for his removal at any time.

That will sharply cut the power he will hold when trying to pass legislation on critical issues including funding the government, addressing the nation’s looming debt ceiling, and other crises that may arise.

Republicans’ weaker-than-expected performance in November’s midterm elections left them with a narrow 222-212 majority, which has given outsized power to the right-wing hardliners who have opposed McCarthy’s leadership.

Those concessions, including sharp spending cuts and other curbs on McCarthy’s leadership, could point to further turbulence in the months ahead, especially when Congress will need to sign off on a further increase of the United States $31.4 trillion borrowing authority.

Over the past decade, Republicans have repeatedly shut down much of the government and pushed the world’s largest borrower to the brink of default in efforts to extract steep spending cuts, usually without success.

Several of the hardliners have questioned McCarthy’s willingness to engage in such brinksmanship when negotiating with President Joe Biden, whose Democrats control the Senate.

They have raged in the past when Senate Republicans led by Mitch McConnell agreed to compromise deals.

The hardliners, also including Freedom Caucus Chairman Scott Perry and Chip Roy of Texas, said concessions they extracted from McCarthy will make it easier to pursue such tactics this year or force another vote on McCarthy’s leadership if he does not live up to their expectations.

“You have changes in how we’re going to spend and allocate money that is going to be historic,” said Representative Scott Perry, the chairman of the hard-right House Freedom Caucus.

“We don’t want clean debt ceilings to just go through and just keep paying the bill without some counteracting effort to control spending when the Democrats control the White House and control the Senate.”

One of those Democrats, Senate Majority Leader Chuck Schumer, warned that the concessions McCarthy made to win the job may come back to haunt him.

“Kevin McCarthy’s concessions to the extremists in his party make it far more likely that the MAGA Republican-controlled House will cause a government shutdown or a default with devastating consequences to our country,” Schumer said in a statement.

In sharp contrast to this week’s battles among House Republicans, Biden and McConnell appeared together in Kentucky on Wednesday to highlight investments in infrastructure.

McCarthy’s belated victory came the day after the two-year anniversary of a January 6, 2021, attack on the US Capitol, when a violent mob stormed Congress in an attempt to overturn then-President Donald Trump’s election loss.

This week’s 14 failed votes marked the highest number of ballots for the speakership since 1859, in the turbulent years before the Civil war.

McCarthy’s last bid for speaker, in 2015, crumbled in the face of the right-wing opposition. The two previous Republican speakers, John Boehner and Paul Ryan left the job after conflict with right-wing colleagues.

McCarthy now holds the authority to block Biden’s legislative agenda, force votes for Republican priorities on the economy, energy, and immigration, and move forward with investigations of Biden, his administration, and his family.

But McCarthy has agreed to concessions that mean he will hold considerably less power than his predecessor, Democrat Nancy Pelosi. That will make it hard for him to agree to deals with Democrats in a divided Washington.

Allowing a single member to call for a vote to remove the speaker will give hardliners extraordinary leverage.

The agreement would cap spending for the next fiscal year at last year’s levels – amounting to a significant cut when inflation and population growth are taken into account.

That could meet resistance from more centrist Republicans or those who have pushed for greater military funding, particularly as the United States is spending money to help Ukraine fend off a Russian assault.

Moderate Republican Brian Fitzpatrick said he was not worried that the House would effectively be run by hardliners.

“It’s aspirational,” he told reporters. “We still have our voting cards.”