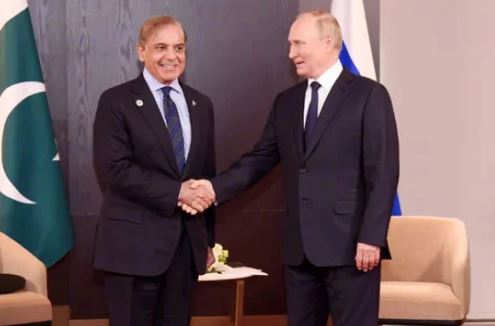 ISLAMABAD: Russia is ready to provide Pakistan with gasoline on a delayed payment basis, media reported on Tuesday. This major development comes after last week’s meetings of Prime Minister Shehbaz Sharif and Russian President Vladimir Putin in Samarkand, on the sidelines of the Shanghai Cooperation Organisation (SCO) summit.

Matters regarding oil, gas and wheat supplies to Pakistan from Moscow were discussed during the three meetings.

The report added that the US has also not opposed the proposed deal openly amid Pakistan’s severe economic crisis caused by deadly floods.

Addressing a press conference on September 18, Defence Minister Khawaja Muhammad Asif revealed that Russia proposed that its gas pipeline infrastructure which was in place till Central Asian states could be extended to Pakistan through Afghanistan.

The two leaders also expressed commitment to expand bilateral cooperation between their countries in all areas of mutual benefit, Khawaja Asif said.

On September 15, Russian President Vladimir Putin told PM Shehbaz Sharif that the installation of a pipeline for the supply of gas to Pakistan from Moscow is possible.

President Putin also expressed solidarity and support for the flood-hit population in Pakistan after he was informed about the devastating impact of the climate-induced calamity.

PM Shehbaz reaffirmed Pakistan’s commitment to work closely with Russia to expand and strengthen cooperation across all areas, including food security, trade and investment, energy, defence, and security.

Speaking about regional politics, PM Shehbaz said that both Pakistan and Russia had vital stakes in a peaceful and stable Afghanistan, adding that Pakistan was committed to supporting all regional and international efforts to stabilise its neighbouring country.