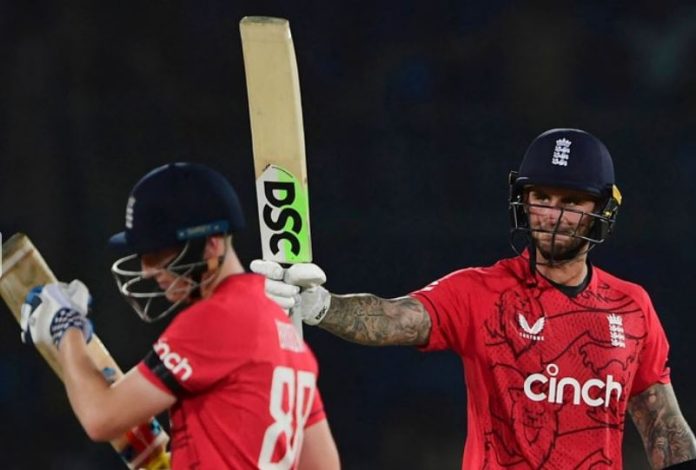 KARACHI: Midway thro­ugh their pursuit of 159 in their first match in Pakistan since 2005, England’s Alex Hales made his first mistake. The explosive opener, playing his first international match after three years, played a flat shot off Pakistan spinner Usman Qadir straight into the hands of Shan Masood at mid-wicket but got an instant reprieve as the debutant spilled it.

England did lose Ben Duckett two balls later, but the arriving Harry Brook carried his team across the finish line with four balls and six wickets to spare in the first of the seven Twenty20 Interna­tionals here at the National Stadium on Tuesday.

The right-hander, who won the Pakistan Super League with Lahore Qalandars earlier this year, ended up unbeaten with 42 off 25, hitting seven fours in his knock.

With the comfort of having Hales at the other end, Brook ensured England kept the asking rate under control and launched his match-winning onslaught with a straight hit off an Usman full toss in the 13th.

After negotiating slow left-armer Mohammad Nawaz with care in the next over, Brook plundered pacer Shahnawaz Dahani for two fours before Hales celebrated his survival by bludgeoning the right-armer down the ground for another boundary.

Brook showed no respect for Pakistan pace spearhead Naseem Shah as well, when he crafted three boundaries off the right-armer in the following over.

Fast bowler Haris Rauf did get Hales in the 17th, but that was too late for Pakistan with England needing just 16 off 18. A boundary by England’s stand-in skipper Moeen Ali and two more by Brook took England over the line.

Hales, who managed 53 off 40, had set the base for England earlier in the innings.

The right-hander, who plays for Islamabad United in the PSL, gave the visitors momentum in the powerplay despite losing fellow opener Phil Salt to Dahani in the third over, thanks to an acrobatic fielding effort at square-leg by Haider Ali.

Hales put up short partnerships of 34 off 23 and 34 off 27 with Dawid Malan and Duckett respectively before the duo was undone by Usman to allow Brook to arrive in the middle.

Unlike England, the better part of Pakistan’s innings came too early.

The hosts’ struggles against spin and their over reliance on the openers came to light once again as they failed to convert a blistering start by captain Babar Azam (31 off 24) and Mohammad Rizwan (68 off 46).

The Pakistan captain showed the elegance and class he is known for, starting the innings with a whip across his legs for a boundary.

The packed stands at the National Stadium chanted Babar’s name as he dispatc­hed Sam Curran through the leg-side again before Rizwan grabbed the crowd’s attention when he cut David Willey with utter dominance before whipping one through square-leg against his Multan Sultans team-mate.

The Pakistan openers kept scoring freely, only until England leg-spinner Adil Rashid bamboozled Babar with an unplayable googly that castled the right-hander in the 10th over, leaving Pakistan at 87-1 by the end of it.

Despite the in-form Rizwan was still at the crease, Pakistan’s run-rate dipped with spinners operating from both ends.

Rizwan’s six against Rashid in the 12th over was Pakistan’s only boundary scored between the dismissals of Babar and Haider, who came into bat and number three before getting caught at deep square leg off Curran in the 14th.

The incoming Shan struck a boundary through extra cover off Moeen Ali in the 15th before Rizwan was undone by a stumping three balls later after adding 68 off 46.

Shan’s debut was spoiled when the left-hander fell to Rashid in the next over with Pakistan at 127-4 by the end of the 16th over.

It left Iftikhar Ahmed and Mohammad Nawaz with the job to provide the final flourish.

Iftikhar did raise hopes of that when he muscled Willey over long-on for a big six, only to see Nawaz losing his stumps to Luke Wood’s pace and swing five balls later.

Wood eventually accounted for Iftikhar (28) in the final over, but after getting hit for another maximum before the pacer dismissed tailender Naseem.

Khushdil Shah not out 5

Usman Qadir not out 0

Moeen Ali not out 7