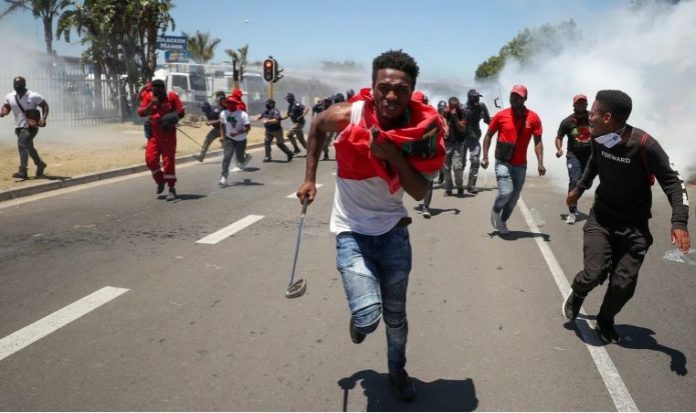 Tear gas fired outside Cape Town school after graduation party, allegedly organised by parents, was attended only by white students and teachers

The South African police have fired tear gas at opposition activists protesting against alleged racism at a Cape Town school after a so-called “whites-only” year-end dance party was organised off-site, reportedly by parents.

The protesters dispersed and regrouped a few blocks away.

Miller said the protesters were “quite peaceful” and have accused the police of being heavy-handed.

“They are also angry at the police and saying they won’t respond in the same manner against white protesters,” she said.

Police later told the protest organisers only 100 people were allowed to march to the school.

The protests were the latest in a string of demonstrations against alleged racism at Brackenfell High School following the party, which was held at a winery farm in Stellenbosch, east of Cape Town, on October 17.

The school denies the event was an official function and maintains it was privately organised by parents.

“The masked ball, referred to as a matric farewell, was a private party organised by the parents of matriculants, and did not fall under the control of the school at all,” the school’s governing body wrote in a letter to parents, according to IOL.

“The function was held on a private venue and not at the school, as certain allegations claim. The governing body and staff of Brackenfell High School therefore distance themselves from any allegations that Brackenfell High School will condone or accommodate any events that are exclusively reserved for certain groups, and especially racial groups.”

A few days after the party, EFF members tried to march to the school but were blocked by some of the students’ parents resulting in fistfights.

The confrontation disturbed President Cyril Ramaphosa who called for an investigation, describing the clashes as “deeply regrettable”.

“The spectacle of parents and protesters coming to blows at the school gate is deeply unfortunate,” said Ramaphosa, adding the development brought “back hurtful memories of a past we should never seek to return to”.

The clashes occurred a few weeks after similarly racially-charged protests in the central farming town of Senekal over the brutal murder of a white farm manager by suspected Black assailants.

Despite the end of apartheid a generation ago, racial tensions in South Africa often remain high.