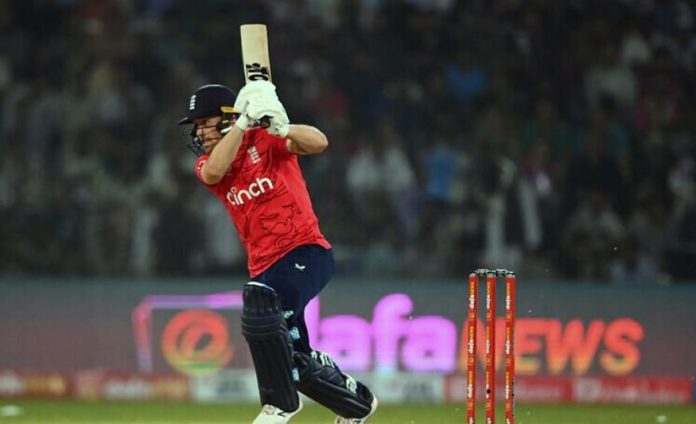 Lahore: England’s Phil Salt scored a blistering half-century as the visitors raced to an eight-wicket win over Pakistan in their sixth Twenty20 clash in Lahore on Friday to level the seven-match series at 3-3.

Salt, who had struggled for runs coming into the game, looked in ominous form from the outset when he opened his innings with two fours before helping England bring up 100 in just seven overs with a six off Aamer Jamal.

Alex Hales gave him support with a breezy 27 while Dawid Malan contributed 26, with both batsmen falling to the leg-spin of Shadab Khan.

The wickets proved to be mere consolation for Pakistan as Salt continued his onslaught and struck the winning runs in the 15th over, ending with 13 fours and three sixes in his 41-ball knock.

Earlier, Pakistan lost their opening two wickets for 15 after being put in to bat before captain Babar Azam launched a fine counter-attack, hitting seven fours and three sixes in an unbeaten 59-ball 87.

He was briefly supported by Iftikhar Ahmed (31) but Pakistan’s middle-order failings cost them again as the bowling pair of David Willey (2-32) and Sam Curran (2-26) restricted the hosts to 169-6.

The teams will contest the final match in the series at the same venue on Sunday.

Azam equalled India star Virat Kohli’s record of the fastest man to 3,000 runs in cricket’s shortest format as Pakistan scored 169-6 in the sixth Twenty20 international against England in Lahore on Friday.

It was his 27th half century.

Azam hit three sixes and seven boundaries and added 48 for the fourth wicket with Iftikhar Ahmed (31) and 47 for the third with Haider Ali (18).

England rested the pace duo of Mark Wood and Chris Woakes to bring in Reece Topley and Gleeson.

The last match is also in Lahore on Sunday.