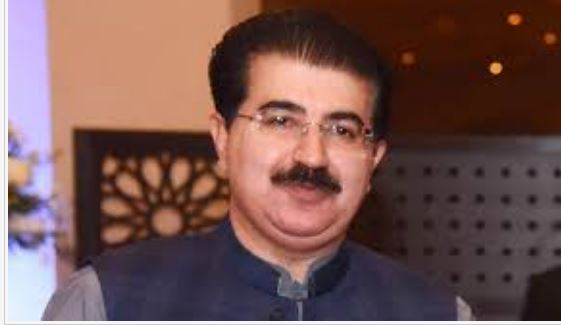 Islamabad, 7 Sept: Chairman of the Senate, Sadiq Sanjrani, today visited the areas devastated by floods in Sind and Balochistan. In a comprehensive tour, which included visits to camps of displaced persons and briefings by the local administration, plus aerial views by helicopter of Jafferabad, Usta Mohammed, Sohbatpur, Dera Murad, Kandhava of Jhal Magsi, in Balochistan, and Jacobabad, Shiranpur village of Mohammad Fahad Thaheem  which are some of the worst affected areas in both provinces. Chairman Senate assured the persons that the Federal and provincial governments were working hard to provide immediate relief to the affected people. The delegation also visited medical camps as well as a home for the elderly and a temporary learning centre for children. The Chairman Senate said that he and his delegation were visiting to meet the people personally to learn at first hand about the devastation caused by floods plus see the relief process so the Parliament too could help in the provision of relief to the victims of the floods. The delegation was also briefed by the Commanding Officer of PAF Base Shahbaz at Jacobabad about the role played by PAF in expediting the relief process as well as coordinating fast track provision of relief goods. Chairman Senate Sadiq Sanjrani especially praised the role of the Pakistan Armed Forces, the Pak Army and Air Force, in expeditiously providing relief by road and air to the flood affectees, thereby saving lives and helping displaced persons to safety. The delegation included Senators Maulana Ghafoor Haideri, Mushahid Hussain Sayed, Sana Jamali, Prince Omar of Kalat ,Nasibullah Bazai & Mohammad Fahad Thaheem of Jacoabad.