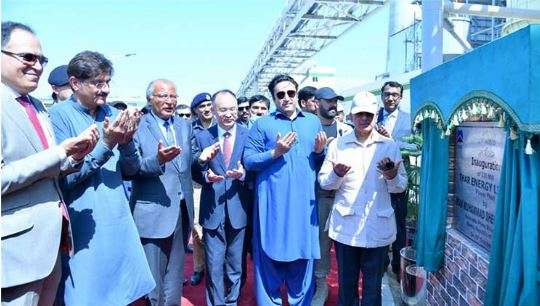 THAR, OCT 10 /DNA/ – Prime Minister Shehbaz Sharif on Monday said amid skyrocketing fuel prices, the inexpensive energy production from Thar Coal Mines Project would prove to be a game-changer of development for the entire country.

The Thar Coal Project, he said could help the government save up to $ 6 billion as the expenditure on the import of energy including petrol and liquid petroleum touched $24 billion.

Addressing the inauguration of commercial operations of Phase-II of Sindh Engro Coal Mining Company (SECMC) during his visit to Thar Coal Mines Block-II, he said the Thar Coal Project was high on the agenda for the government in view of reduced cost of power generation.

The prime minister on the occasion inaugurated a 330 MW Power Plant of Thar Energy Limited (TEL) and also inspected the construction site of SECMC Mine Phase-II at Islamkot.

Shebaz Sharif said not benefiting from the country’s indigenous coal reserves was a huge mistake and announced to convene a meeting of stakeholders on Thar Coal mines next week to discuss the formalities.

He said the federal government, in collaboration with the Sindh government, would chalk out a policy framework on the Thar Coal mines project, with an objective to connect it with other coal-powered power plants in the country, producing 4,000 megawatts.

He mentioned the international cost of coal had come down from $67 to $44 and had prospects of further reduction up to $ 30.

The coal-powered plants, he said would prove to be a feasible operation for electricity production at the rate of Rs 10 per unit.

The prime minister said Thar Coal project would save the country’s foreign exchange and help thrive the national economy.

On March 2023, he said the Thar Coal Mines Project would be connected through a freight rail track for the transportation of coal to other parts of the country.

He lauded the Sindh government, Hubco, the Government of China, and the Chinese companies for training the local professionals and workers, and also appreciated the women working in the field including at water plants and dumping trucks.

He expressed satisfaction that Thar was undergoing fast development after former Prime Minister Benazir Bhutto first visited the area in 1996 and envisioned a prosperity plan for the locals.

Foreign Minister Bilawal Bhutto Zardari said that Thar, once used to be known for malnutrition, and infant and maternal mortality rate, had now emerged as a game-changer and a public-partnership model of development.

He mentioned that the Thar Coal Mines project had contributed to the provision of job opportunities to the local people of Thar, thus improving their lifestyles.

He said under public-partnership projects, the barren desert of Thar was now witnessing crop irrigation and fish breeding even with the use of hard water.

Bilawal stressed for replicating collaborative projects in other parts of the country and expressed confidence that the prime minister, with his inspiring ‘Shehbaz Speed’ , would materialize the development plans at a fast pace.

He regretted that had the work on Thar coal not stalled since its first mining of reserves in 1991, the project would have produced 10,000 megawatts.

He termed Sindh province as the ‘energy basket of Pakistan’, with immense potential of natural energy resources, including solar and wind energy.

Chinese Ambassador Nong Rong congratulated the Government of Pakistan on the successful completion of the project and lauded Prime Minister Shehbaz Sharif for his “consistent devotion and firm support” in strengthening Pakistan-China cooperation including in CPEC projects.

He hoped that the new power bloc would help overcome energy shortage, and provide reliable and affordable electricity.

The envoy thanked the Pakistan Army for providing foolproof security to the Chinese professionals working in the country.

As an ‘Iron Brother’, he said China would be happy to continue assisting Pakistan to help it achieve prosperity.

He said Hubco’s investment in the production of the cheapest power was significant for ensuring long-term energy security in the country.

He mentioned the support of Shanghai Electric Power Company Limited and the experts from China, who worked hard to materialize the project.