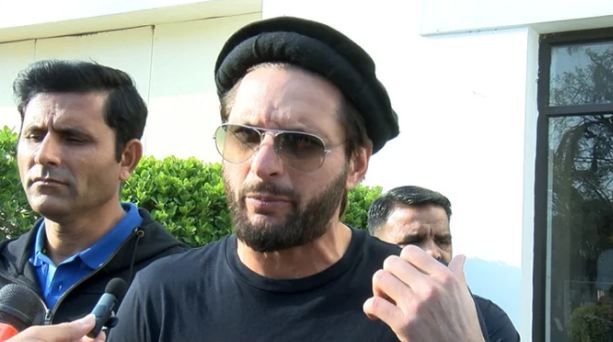 KARACHI: Pakistan’s newly-appointed chief selector Shahid Afridi has hinted at the inclusion of pacer Mir Hamza and wicket-keeper batter Sarfaraz Ahmed in the final XI of Pakistan in the upcoming Test series against New Zealand.

The first major decision by Afridi — taken a day earlier in consultation with skipper Babar Azam — was to include Hamza, Sajid Khan, and Shahnawaz Dahani in Pakistan’s Test squad for the home series.

In conversation with journalists Sunday, Afridi said that players were included after considering their performances and Pakistan’s strength.

“I’ve got to know that Naseem Shah is not fully fit so it was good to add two fast bowlers to the squad and we’ve been carrying Dahani for so many days, when will he get the opportunity?”

“Also, since Shaheen is not around, it was important to have a left-hander that’s why Hamza was included,” Afridi said, noting that the fast bowler has performed well and that he deserves to play now.

Afridi added that players’ workload management is important and it is something which Babar has also emphasised.

“We have players who are constantly playing all formats. We need to strengthen our bench so that if one is rested, there should be no problem,” the former skipper said.

He also mentioned that the side has some seniors who’ve been warming the bench for a long time. “I am meeting Babar Azam tonight and we will discuss how to move.”

Afridi also added that he wants to see Babar among the great captains and he will support him to become as good a skipper as good a batsman as he is.

He also pressed for the need to adopt revolutionised approach in cricket, saying Pakistan should move forward from old-school thoughts of preparing typical wickets.

“We can, for sure, prepare pitches like South Africa or Australia. Why should we keep on preparing the same slow-turn wickets every time? We have prepared good wickets in past, we can do it again, we can’t become a top team if we continue to adopt an old-school mentality,” he concluded.