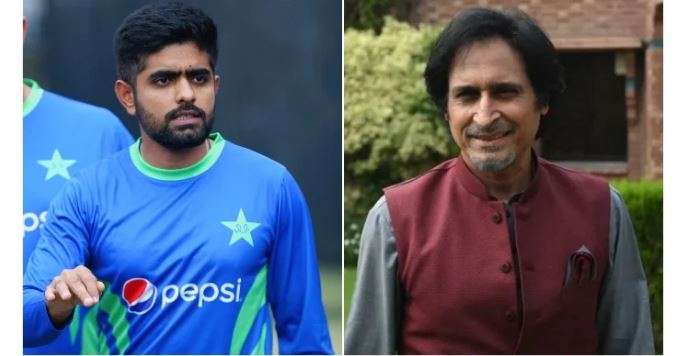 LAHORE: Before the Babar Azam-led team left for Australia ahead of the T20 World Cup, Pakistan Cricket Board (PCB) Chairman Ramiz Raja advised the captain to dream of winning the international tournament and bringing the trophy home.

The Men In Green will start their T20 World Cup journey tomorrow (Sunday) with the first game scheduled against archrivals India at the Melbourne Cricket Ground (MCG).

“World Cup is a mind game. It is a task of not losing courage and a fulfilment of a dream — which is to win a world cup,” he said, speaking to Geo News.

The former cricketer advised the team’s captain to dream about winning and remind himself that there is no option but to win the mega event.

Ramiz expressed hope that Pakistan will win the world cup.

Before the team left to participate in the T20 event, the board’s chairman also shared some tips with them to play in Australia — where he played as a member of Pakistan’s World Cup-winning team in 1992.

He said that Australian pitches are usually difficult for Pakistani batters and they will have to increase their bat’s speed in a technical way because the ball’s pace accelerates after its bounces back from the ground.

“In Pakistan, players get the time to play shots, but that’s not the case in Australia,” he shared, advising bowlers not to experiment a lot.

Ramiz further added that Pakistan has a team that can win, while performances may fluctuate.

“The other team can also play well some day or the weather might play a role [in the match]. But fans must support the team, as it is the best to have been sent to [play] the field,” Ramiz remarked.

The board’s chief, in his message to the team, advised them to play with utmost morale and courage.

“Play while considering yourselves as the world champions. Show your best game,” he said, encouraging the Green Shirts to compete.

He added that even if the team loses after fighting, no one will have a problem.

“Fans have an emotional attachment to the team,” he said.

The PCB chairman highlighted that Pakistan’s bowling attack is brilliant and Shaheen Afridi’s return will have a huge impact on the team.

“The dressing room comes alive with Shaheen’s presence. His existence refreshes the team with hopes of winning,” Ramiz said.

Commenting on Pakistan’s decision to not play on a neutral venue during the Asia Cup next year, Ramiz said: “Pakistan is not ready to withdraw from being the host of the Asia Cup.

It will host the tournament whether India decides to visit or not. If Asia Cup takes place on a neutral venue, Pakistan will not participate.”

According to PCB sources, India’s decision to not play Asia Cup in Pakistan is internal. The board will not let the tournament get affected due to India’s withdrawal from visiting Pakistan.

Sources added that Asia Cup will be held with teams willing to come to Pakistan and Green Shirts will not participate if the event is moved elsewhere, as playing at a neutral venue means disregarding the board’s three years of hard work of reviving the game in Pakistan.

The board, as per sources, said it will write again to the Asian Cricket Council and member countries regarding the matter next week to remind them for summoning ACC’s urgent meeting.