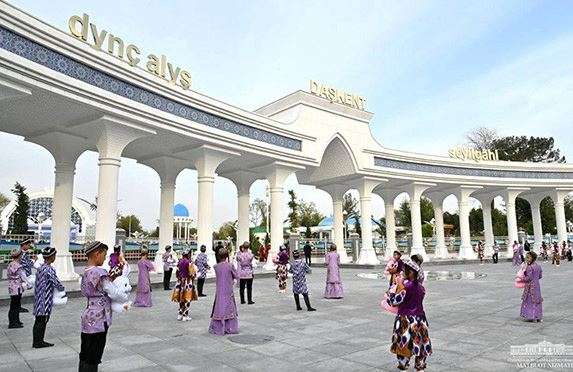 Tashkent, OCT 22: President of Uzbekistan Shavkat Mirziyoyev, accompanied by the President of Turkmenistan Serdar Berdimuhamedov, took part in the opening ceremony of the Tashkent Park in Ashgabat.

The park is located on the main metropolitan avenue of Magtymguly. A landscape garden with flower beds has been created on the territory of about 3 hectares, miniature copies of the sights of the city of Tashkent have been erected.

The heads of state got acquainted with the conditions created here, planted trees as a sign of good aspirations.

National songs and melodies of the Uzbek and Turkmen peoples were performed. The Presidents wished happiness to the newlyweds who celebrated their wedding here.

The ceremony was attended by official delegations of the two countries, representatives of the public of Ashgabat, youth.

As is known, during the visit of the President of Turkmenistan to Uzbekistan, Ashgabat Park was opened in Tashkent, which became the embodiment of strong friendship between the peoples of the two countries.

The ceremony of launching the construction of the Khorezm – Dashoguz Border Trade Zone was also held here.

The construction of the Border Trade Zone is being carried out on the adjacent territory of the two countries in the area of the Shavat – Dashoguz checkpoint.

Today, a Protocol was also signed on the continuation of work on the creation and regulation of the activity of this facility. It is planned to create a modern infrastructure here, including trade pavilions, warehouse facilities, container sites and workplaces for entrepreneurs. The project will play an important role in the growth of mutual trade and the intensification of business contacts.

The elders of Khorezm and Dashoguz regions, responsible persons congratulated everyone on this significant event via videoconference and asked for permission to start activities.

The Presidents of Uzbekistan and Turkmenistan launched the construction.

The heads of the two countries expressed confidence that many more joint projects will be implemented in the future, contributing to strengthening the friendship and prosperity of the peoples of the two states.