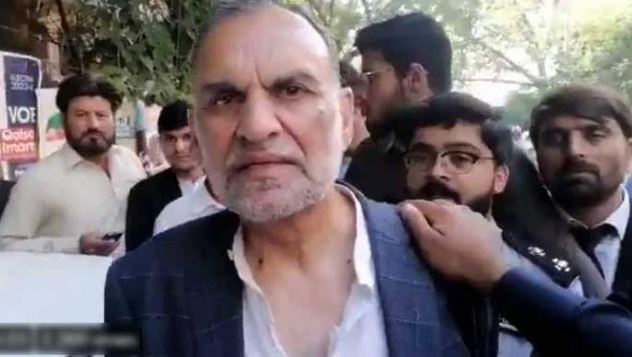 The politician’s lawyer Iqbal Shah told the sources that even though the Balochistan High Court ordered the septuagenarian’s release, the province’s police handed over his custody to the Sindh police.

Senator Swati is now being shifted to the country’s southern-most province via a special aircraft, Shah told the sources.

“Azam Swati released from Balochistan and arrested by Sindh on the same accusation,” he tweeted deeming the situation as a “funeral of law”. Earlier today, the BHC ordered that all first information reports (FIRs) registered against the PTI leader for his controversial tweets against senior military leadership be quashed following a petition filed by the senator’s son against the registration of the cases in Balochistan.

Last week, five FIRs against the senior politician were registered in the southwestern province’s Kuchlak, Hub, Zhob and two other areas after which he was arrested from Islamabad by the Balochistan police. Swati was in their custody after a local court in Quetta approved the law enforcement agency’s request for a physical remand.

At the time of his arrest, the senator was already on judicial remand in Rawalpindi’s Adiala Jail, following his detention for a second time in the case of a controversial tweet on November 27. He was then shifted to Quetta under a transit remand acquired by the police.

The senator had then approached the BHC which ordered that no more cases be registered against him.

During the last hearing, the court also sought a written report of the cases filed against the ailing Swati from the police chief.

Addressing the media after the hearing, Swati’s lawyer said that the court has granted relief to his client if not nominated in another case.

“The government’s lawyer was unable to prove the reason for registering cases against Azam Swati,” Shah said, adding that the investigation officers mentioned the inspector general of Balochistan police being unaware of the FIRs.

Swati is booked in multiple cases across the country for his controversial tweets against military officials.

He was first arrested in the case of a controversial tweet on October 14, after he posted a highly-hateful and threatening message against the army chief, judiciary, and other state institutions, on his official Twitter account.

The senator secured bail in that case.

But on November 27, the FIA once again arrested him for using abusive language against the top military brass including the former army chief.