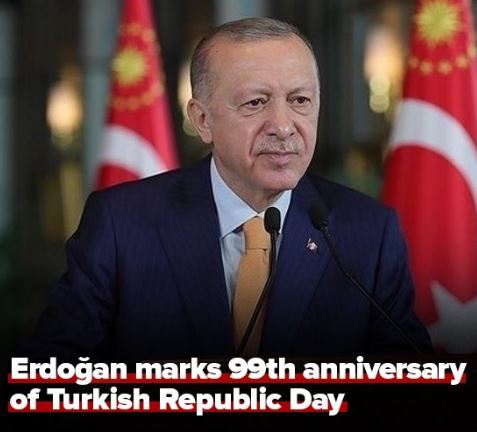 ANKARA, OCT 29: President Recep Tayyip Erdoğan on Saturday marked the 99th anniversary of Türkiye‘s Republic Day and vowed to continue working to elevate the country “above the level of contemporary civilization.”

“Today, we all are proud of and excited for marking the 99th anniversary of the proclamation of the Republic of Türkiye,” Recep Tayyip Erdoğan said in a statement.

“We are working round the clock” to elevate Türkiye “even above the level of contemporary civilizations,” Erdoğan said, underlining that the country was founded at a high price and under harsh conditions.

Türkiye is now a country “whose democracy is taken as an example, whose economy makes a strong impression, whose diplomacy is attentively followed,” he added.

“Amid the increasing global uncertainties, our efforts aimed at establishing stability and justice are appreciated by all. We work to create a zone of peace and prosperity in our near environment with our entrepreneurial and humanitarian foreign policy, from putting an end to the humanitarian tragedy in Syria to bringing a solution to the Russia-Ukraine crisis,” he said.

Türkiye constantly raises the bar for success in all areas, including defense, energy, agriculture, tourism, transportation and education, he stressed.

“Despite all the injustices and hindrances we are faced with, we, with the sensitivity of a chess master, are laying the groundwork for our visions for 2053 and 2071,” Erdoğan added.

The president also honored the memories of Mustafa Kemal Atatürk, who founded the Republic of Türkiye in 1923.

“On this occasion, I once again remember with grace Ghazi Mustafa Kemal (Atatürk), the founder of our Republic, all our heroes who crowned our War of Independence with victory, and all the patriotic members of the Grand National Assembly.”

The Turkish War of Independence started with Atatürk’s landing on the city of Samsun on the Black Sea coast in 1919.

Anatolia’s liberation from occupation opened a new chapter in Turkish history as the young republic was recognized under the Treaty of Lausanne in 1923.

On Oct. 29, 1923, Atatürk officially declared the name of the nation and proclaimed the country’s status as a republic.

A vote then took place in the parliament, the Grand National Assembly, and Atatürk was unanimously elected the first president of the Republic of Türkiye.

Since then, Türkiye has celebrated Republic Day every year on Oct. 29.