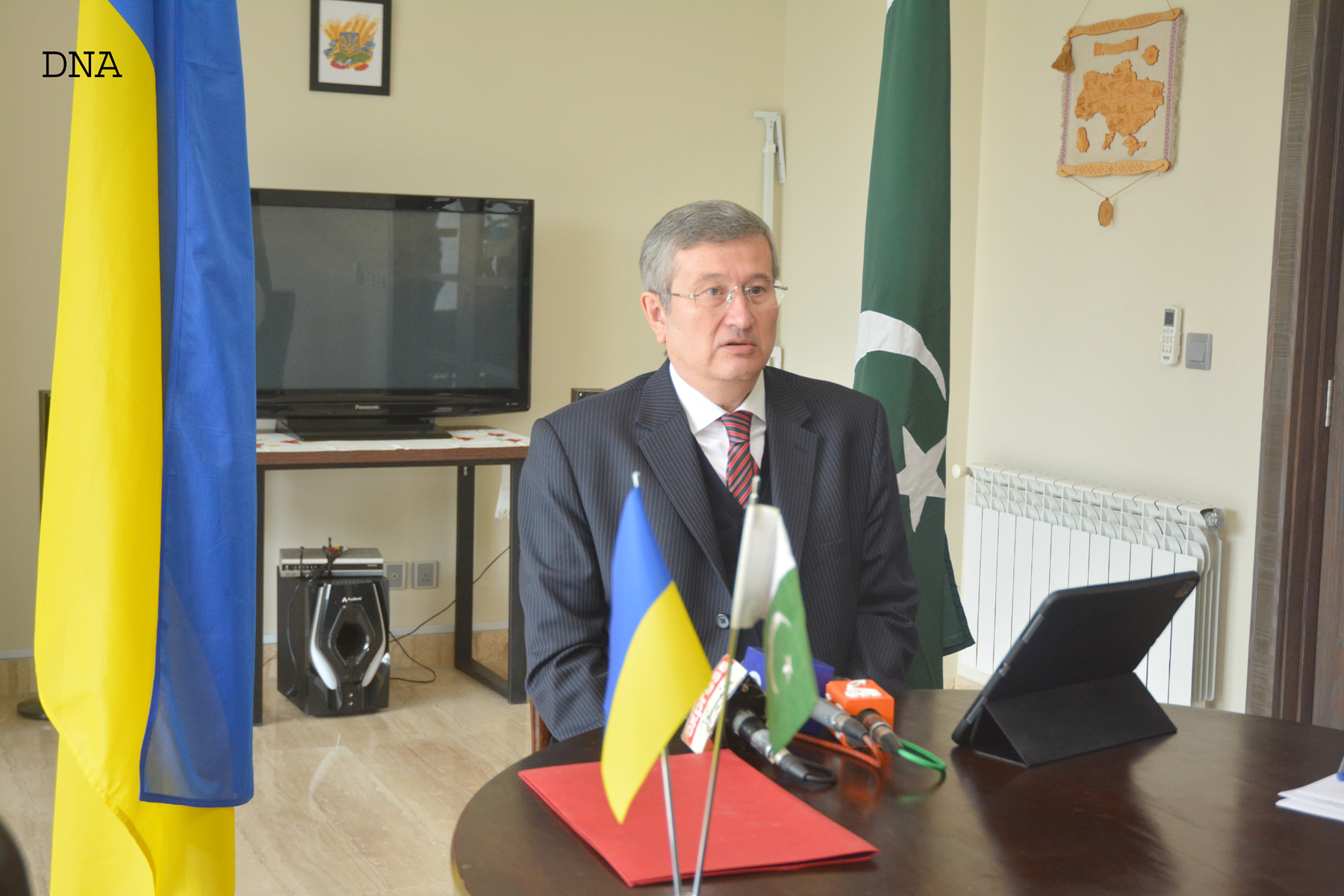 Ambassador of Ukraine to Pakistan Markian Chuchuk says we expect that our Pakistani partners would tell the Russians to make business instead of war. Pakistan is powerful nuclear state and its stance could not be ignored’

ISLAMABAD:  Ambassador of Ukraine to Pakistan Markian Chuchuk has said we ask Pakistan to play its role for peace and security at the Ukraine and Russian borders. In this backdrop Prime Minister Imran Khan’s visit to Russia holds significance.

The ambassador expressed these views during a press briefing on Tuesday.

He further said PM Imran Khan’s visit will set another brick in the wall of averting a big war in Europe. ‘We expect that our Pakistani partners would tell the Russians to make business instead of war. Pakistan is powerful nuclear state and its stance could not be ignored’, he added.

Ukraine believes in peaceful settlement of the conflict however if war is imposed we have every right to respond and defence ourselves by using all means.

He added, Russians plead they are ready for talks but at the same time are building up their forces at the borders. So far over 150,000 Russian troops have been deployed at the border. Their actions do not match their words. Their posture can further escalate tensions.

The ambassador further said Ukraine believes in the peaceful resolution of the conflict. He also quoted the Ukraine president’s recent statement in which he said that the international community and the international organisations need to play their role for the de-escalation of tensions.

Talking about the recent development he said, Ukraine condemns the Russian Federation’s decision to recognise the “independence” of the quasi-entities it had created in the temporarily occupied territories of Ukraine, the so-called “Luhansk People’s Republic” and “Donetsk People’s Republic”.

With this action the Russian side has blatantly defied the fundamental norms and principles of international law, the UN Charter, violated the sovereignty and territorial integrity of Ukraine within its internationally recognised borders.

‘The Ukrainian side understands Russia’s intentions and its objective to provoke Ukraine. We are taking into account all the risks and not giving in to the provocations as we remain committed to politico-diplomatic settlement of the Russian-Ukrainian armed conflict’, he added.

He said, at the instruction by President of Ukraine Volodymyr Zelensky, the Ukrainian diplomatic service is currently making use of the entire arsenal of instruments of diplomacy to avert the expansion of the armed conflict.

According to a recent statement issued by the Ukrainian Ministry of Foreign Affairs, the Russian Federation’s next decisions and moves depend greatly on global reactions to recent developments. We therefore insist on application against Russia of harsh sanctions to send a clear signal of inadmissibility of further escalation. The time has come to act in order to stop Russian aggression and restore peace and stability in Europe’.

The ongoing escalation in Ukrainian-Russian relations is not a matter of just last few months. Ukraine has been facing external military aggression for 8 years, since February 20, 2014.  Since then, as a result of Russian hybrid invasion, parts of the sovereign territory of Ukraine (the Autonomous Republic of Crimea and the city of Sevastopol as well as certain territories of Donetsk and Luhansk regions) remain under temporary foreign occupation.

Since November 2021, Russian Federation has been consistently amassing troops along the border with Ukraine, waging military drills in close proximity to Ukrainian borders, and extending a range of “security demands” to Ukraine and its international partners as well as NATO.

Despite the efforts of Ukraine and international community, Russian Federation hasn`t given clear explanation for presence its troops near Ukrainian border and could not provide clear and convincing evidence of the withdrawal of its troops

Ukraine considers such Russian military presence as an unprovoked and unjustified, particularly, as it leads to deteriorating security situation on temporary occupied territories of Donbass.

The Russian armed formations have unleashed provocative firing along the entire length of the contact line in Donbas, significantly aggravating the already tense security situation.

According to Article 2 (4) of the United Nations Charter, all UN Members shall refrain in their international relations from the threat or use of force against the territorial integrity or political independence of any state. Based on provisions of Article 2 (4) of the UN Charter, Ukraine considers presence of Russian troops along its border as a direct threat of use of these forces against her territorial integrity and independence and, for this reason, as a violation of Article 2 (4).

The government of Ukraine does not intend to launch an offensive operation in the temporarily occupied territories of Donetsk and Luhansk regions. Ukraine is not conducting or planning any sabotage acts in Donbas.

Ukrainian nationals reside on both sides of the contact line. Their peace, security and well-being are an absolute priority for Ukraine. So far, Ukraine remains firmly committed to the political settlement and, together with partners, pursue the diplomatic dialogue.