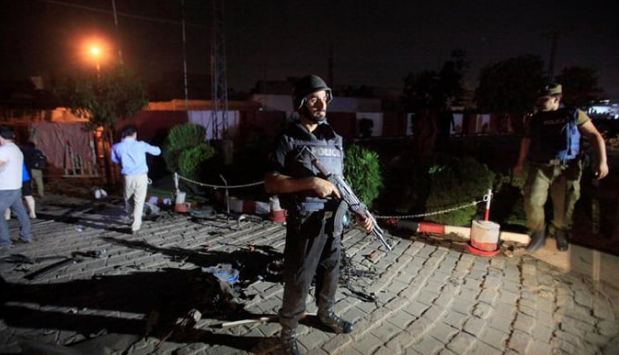 Terrorists martyred two Counter-Terrorism Department (CTD) officials when they were at a local hotel in Khanewal, a senior police official confirmed Tuesday.

He further stated that the perpetrators were on a motorcycle. Among the CTD officials, “one inspector remained unhurt,” Sultan said.

Interior Minister Rana Sanaullah took notice of the incident and asked Punjab’s inspector-general of police and the province’s chief secretary to submit a report.

In a statement, Sanaullah expressed his grief by saying “the incident is lamentable”.

Expressing his concerns, he said the security situation in Punjab is a cause of concern, adding that the provincial government should take necessary measures to prevent such incidents from happening in the future.

In December 2022, militants also took over a CTD compound in Khyber Pakhtunkhwa’s Bannu area, which was cleared by the Pakistan Army soldiers three days later. However, four soldiers embraced martyrdom and 10 sustained injuries

The latest incident comes as Pakistan witnesses a spike in terror incidents, especially in KP and Balochistan, after the Tehreek-e-Taliban (TTP) ended a ceasefire with Islamabad.

In light of the incidents, the National Security Committee (NSC) decided that no country will be allowed to provide sanctuaries and facilitation to terrorists and Pakistan reserves all rights to safeguard its people.

“This [terrorism] will be dealt with the full force of the state. Pakistan’s security is uncompromisable and the full writ of the state will be maintained on every inch of the territory,” the committee decided as the nation of 220 million continue to deal with rising terrorism in the country.

The government and state institutions resolved that Pakistan’s fundamental interests for existence, security and progress will be well-protected with bravery and lasting strategy.

It was determined in the meeting that terrorists are Pakistan’s enemies and the entire nation is united on the single narrative of standing against terrorism.

“Those challenging writ of the state will get a full force response,” the statement read.

Pakistan saw 376 terror attacks during the last year, resulting in increased casualties in the KP and Balochistan, while December turned out to be the deadliest month for the country.

In its annual report released, the Center for Research and Security Studies (CRSS), stated that a majority of these attacks were claimed by banned terror outfits such as TTP, Daesh, and the Balochistan Liberation Army (BLA).