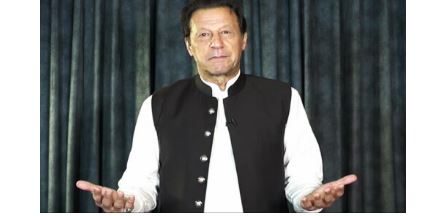 In his latest Tweet, the former PM said, “How can Imported govt brought
to power through US conspiracy, led by Crime Minister, who s family
along with Zardari have volumes written on their corruption, be trusted
with sale of national assets & that too though bypassing all procedural
& legal checks.”

He said, “These peoples have been plundering Pakistan for last 30 years
and are now responsible for the present economic meltdown.”

Earlier today in his Tweet, the PTI chairman said that in just over
three months the Zardari – Sharif mafia has brought the country to its
knees politically and economically.

The former PM said that PML-N and PPP want to save their illegally
accumulated wealth amassed over 30 years of plundering Pakistan.

The PTI Chairman further said that he can say with certainty after his
interaction with nation and its response to his call that people of
Pakistan have had enough and will not allow these mafias to continue
their loot and plunder.

The former premier warned that country is not far from Sri Lanka moment
when public pours out into streets.