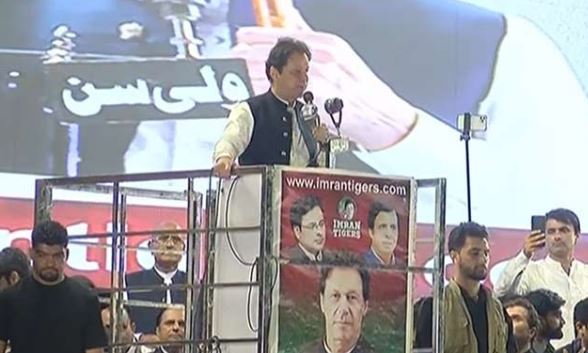 GUJRAT, – Former prime minister and Pakistan Tehreek-e-Insaf chairman Imran Khan said on on Friday that those who used to criticize his government for bowing down before the International Monetary Fund (IMF), have now themselves kowtowed before the international lender.

Addressing a rally in Gujrat on Friday, he said that we have to respect ourselves if we want the world to respect us.

“Today’s rally has broken all previous records of rallies held in Gujrat,” he said and also mentioned the increasing diesel price. When my government was toppled through conspiracy, the prices of petrol was Rs150 and diesel Rs145, he said adding that he was trying to wake the nation up.

The former PM went on say that the people of Gujrat have strong political awareness and urged the youth to set the highest targets and aims and see the biggest dreams in their lives as this thought would bring them to the highest place in the world.

Khan maintained that Pakistani youth had always gained respect and honour in the world due to their talent and hardworking.

The PTI chairman further said that the nation does not progress until true freedom, adding that slaves cannot progress but can only become good slaves.