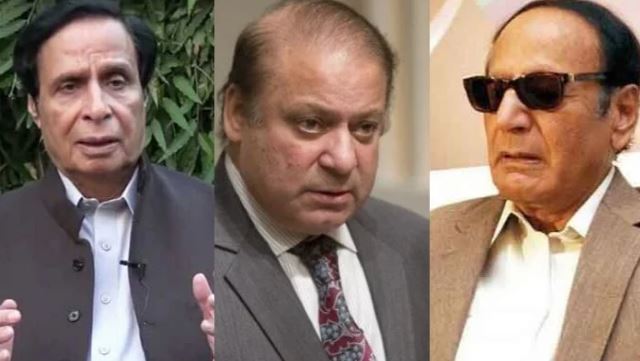 LAHORE, DEC 11: The latest political developments show a thaw in relationships between the Chaudhrys of Gujrat and the Sharifs’, signaling chances of a new political alliance in coming days, The News reported Sunday.

Moreover, there are reports that contacts between the Chaudhry brothers — Punjab Chief Minister Parvez Elahi and former prime minister Chaudhry Shujaat Hussain — are restoring at a certain level which might pave the way for some new political alliances with the political opponents.

An important development took place on Saturday when Minister for Board of Investment Chaudhry Salik Hussain held a crucial meeting with PML-N supremo Nawaz Sharif in London. The two leaders discussed the matters pertaining to Punjab’s political situation and Pakistan Tehreek-e-Insaf’s announcement that it would dissolve the Punjab and Khyber Pakhtunkhwa assemblies.

In a media talk after the meeting with Nawaz, Salik said the deposed premier did not tell him the exact date of his return to Pakistan. He said that in the next general election, Shujaat would lead the PML-Q campaign. He said PML-Q leader Moonis Elahi did not take him into confidence when he joined PTI chief Imran Khan’s bloc. “Chaudhry Shujaat Hussain and I are ready to talk to Moonis Elahi if he wants,” Salik added.

According to sources, the PML-N has expressed its willingness to accept Parvez as chief minister and even PTI’s demand for fresh elections, but conditionally. “The PML-N is in close contact with Chaudhry Shujaat Hussain,” sources said. “As soon it gets something solid from Shujaat, PML-N will move ahead with its strategy.”

Parvez, Shujaat back in touch

Moreover, they added that Parvez and Shujaat were also back in touch. however, no political discussions had so far been reported to have taken place between them. Moonis also disclosed on Saturday that the Punjab CM and Shujaat are back in touch. Talking to online journalists at the Chief Minister’s House, he said he had not met his uncle Shujaat since the day he went to meet him from the assembly.

“There will be no compromise on the demand for snap polls and whatever PTI Chairman Imran Khan says will happen,” sources quoted Moonis as saying. “Elections are the solution for the current political situation,” he added.

As per sources, Moonis said that his party would stand alongside PTI in the future. “Some people do not want PTI and PML-Q to go side by side,” he said, adding that his father wanted to stay beside Khan for a long period of time.

According to sources, Moonis said all the decisions were made after consultations. “We have never done anything that would affect Imran Khan’s politics or respect as he is our benefactor,” he added.

On the other hand, quoting the party stance, sources said the PML-N did not want Parvez’s “double game”. “He [CM Punjab] will have to come out in the open [with what they have on their mind].”

Minister for Interior Rana Sanullah told that Shujaat was an ally of the coalition parties and it’s not uncommon for two sides to hold meetings. “We just don’t want a double game like before,” the minister said.

PML-N sources also said that in case of dissolution of assemblies, Nawaz Sharif would be requested to return to Pakistan immediately. “Nawaz Sharif will be welcomed at the airport,” party sources said.