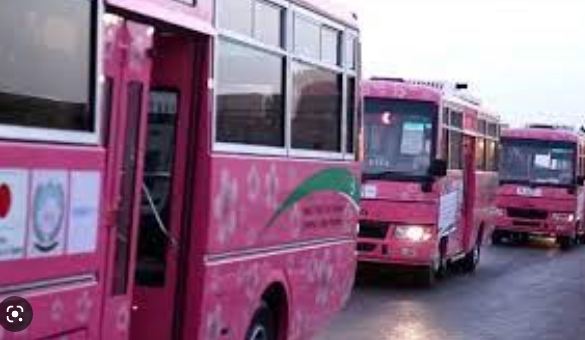 The emergence of the concept of woman empowerment is associated with the women right movements started during the late 19th century and early 20thcentury in the western countries. Equal opportunities across all sectors of the economy without gender discrimination arethe main aim of the women empowerment. Easy women mobility outside the home is considered as a way for empowering women in the society. In Pakistan, women mobility outside the home is restricted by social norms, safety, and security issues. Due to these issues and problems the government of Gilgit Baltistanlaunched “Pink Bus services” on 4th October 2022 to improve the women mobility and safety.

Initially, the pink bus service was operating in Gilgit and Skardu cities. Now the service has extended to other districts of Gilgit Baltistanlike Ghizer, Hunza and Diamer. In many aspects, this initiative can produce positive impacts on the society.In Pakistan when we talk about infrastructure development related to mobilitywe consider only road widening, road repairing and road metalling as parameters, in fact, such developments causesonly increase in the number of vehicles (cars, motorcycles) which leads to congestion and noise pollution. But actually, services like the Pink Bus Service are real infrastructure development because such services fulfill the objectives of infrastructure development in the form of easy accessibility, time-saving and affordability. Unfortunately in our societyharassment rate of females has increased so the female safety and security concerns have become one of the main obstacles to woman’sempowerment. Now the Pink bus service can remove such obstacles and women can play their contributions tothe socio-economic development of Gilgit Baltistan.

Affordable fare playsan important role in the long-term success of such initiative. In the initial stage,the Pink bus service is free of cost. The free-of-cost service will reduce the out-of-pocket expense for passengers which seem good.But a question arises here, on one side Gilgit Baltistangovernment ministers and officials during the press conference said that the federal government of Pakistan has reduced the development budget of Gilgit Baltistan and on the other side they are providing free of cost bus services. Other possible positive impacts of pink bus service can come as reduction inenvironmental degradation, as this problem has become a major issue in Gilgit Baltistan. The carbon emission is the main determinant of environmental degradation and on average a typical vehicle emits about 4.6 metric tons of carbon dioxide per year. As the pink bus service has the potential to reduce thetraffic onroads which promote environment sustainability.

Point to remember that the positive impacts of any project cannot be achieved and sustainable if the project doesn’t continue for longer period. Budget constraints are the common problem in providing public service, as the Gilgit Baltistan government depends upon the federal for development budget, so budget constraints will bethe major challenge for this service in future. Affordable fare should be fixed so that in long run this service can run because, in other cities of Pakistan like Lahore and Karachi, the pink bus service was failed due to financial reasons.

Adoptions of new services are not the easy taskin developing societies. It is possible during the initial phase of service, the number of female commuters may be low than the expected number. In such conditions usually government discontinue the service like the government of KPK discontinued the pink bus service in KPK due to the less commuters. In such a situationthe government of Gilgit Baltistan should shift the larger passenger capacity buses into small passenger capacity vans so that service can easily be continued for longer period.

Service timing also plays an important role in the success of the project. During the peak hour between the 7:00 a.m. to 9:00 a.m.,the service should provide without any disruption because female students and job holders canutilize the bus service to reach their destinations, and from 1:00 p.m. to 4:00 p.m. the same pattern should also be followed because at this time female canalsouse service to return back to their homes from school, colleges and from offices. Further,during these hours service can also be utilized for shopping purpose by housewives.

Although such initiatives can improve women empowerment,but the government should also focus on other problems faced by females as barriers to women empowerment in the society. The lack of quality health services especially for delivery cases, lack of mental health care centers, loweropportunities for higher education, lower job opportunities and zero career counseling are the major issues faced by the females of Gilgit Baltistan, without addressing such problems only ease in mobility cannot enhance woman empowerment in the society.