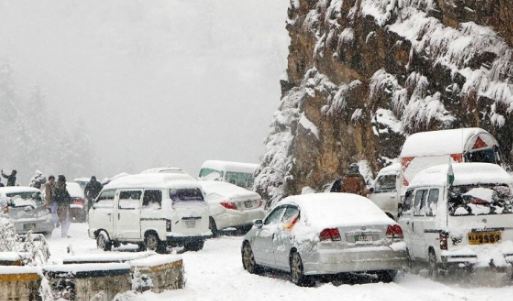 ISLAMABAD, JAN 11 (DNA) — The recent light snowfall on Wednesday turned the weather ideal for tourists to enjoy chilly weather whereas the adventure tourists were being advised to take precautionary measures and follow the safety guidelines amid recreation at Murree and adjoining areas.

Talking to a state run news agency, an official of Pakistan Tourism Development Corporation (PTDC) said the massive snowfall forecast in Murree and other hilly areas as per the Met Office has resulted in long queues of vehicles in the area.

He said that the tourists and commuters traveling to the hilly areas were instructed to follow safety guidelines to avoid inconveniences, problem and any untoward incident. He said the country is blessed with iconic hilly areas that experience snowfall during the winter every year and the people enjoy snowfall whereas the cold weather adds more to the beauty and significance of these areas.

The official said Pakistan has rich and natural tourism potential that attract million of tourists including locals and foreigners from across the world. He said the Provincial Disaster Management Authority (PDMA), Punjab directed the tourists to wear long dress to protect themselves from cough, flue and other diseases, adding that the commuters should stop vehicles time by time and did not use heater for more than 10 minutes.

“All the authorities concerned are advised to remain alert and vigilant to direct the commuters to follow all precautionary measures to refrain any loss of lives and property,” he said while quoting the PDMA advisory.

The concerned Deputy Commissioners have also been advised to keep District Emergency Operational Centers (DEOCs) operational and functional round the clock during the forecast period of rain and snowfall. = DNA