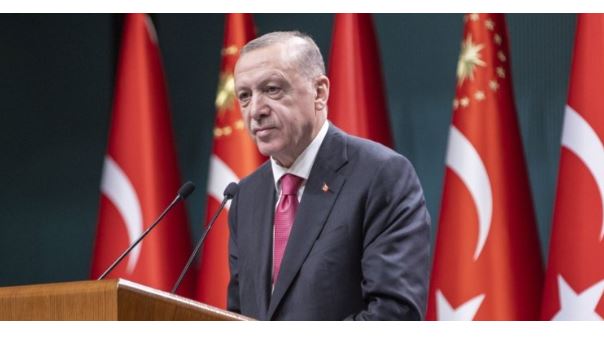 ANKARA, AUG 19: Turkish President Recep Tayyip Erdoğan said Ankara is ready to contribute to ending the Russia-Ukraine war through diplomacy, and invited both leaders for meeting in Türkiye.

“I stated that we will continue to contribute to the solution to the war through diplomacy and negotiations.”

“Just as I told (Russian President Vladimir) Putin during my Sochi visit, I reminded (Ukrainian President Volodymyr) Zelenskyy that we could host the meeting between them,” Erdoğan on Thursday told reporters on board the presidential plane following a one-day working visit to Ukraine.

Erdoğan, Zelenskyy, and UN Secretary-General Antonio Guterres gathered in the Ukrainian city of Lviv to discuss steps to end the Ukraine-Russia war through diplomatic means and maintain a mechanism recently established for the export of Ukrainian grain to world markets.

Erdoğan said Türkiye, Ukraine, and UN discussed steps that can be taken for Ukrainian grain exports, and called on the international community to assume responsibility to revive the diplomatic process.

Türkiye, the UN, Russia, and Ukraine signed a deal in Istanbul on July 22 to reopen three Ukrainian Black Sea ports for exporting Ukrainian grain stuck due to the war, which is now in its sixth month.

Erdoğan said he has separately met with Zelenskyy and Putin since the war started, adding that Türkiye will bring this issue at the UN General Assembly in September.

“The messages to be conveyed there are very, very meaningful. The messages that we and other countries will give there, are very important,” he said.

During the trilateral meeting in Lviv, Erdoğan raised his concern about the ongoing conflict around the Zaporizhzhia nuclear power plant, and said: “We do not want to experience a new Chernobyl.”

He told reporters that Zaporizhzhia issue is not an “ordinary issue,” noting that Ukraine has both its own technical staff and soldiers in Zaporizhzhia.

Erdoğan also said Zelenskyy demanded the removal of Russian mines from the area.

“We will discuss this issue with Putin, and we will especially ask him for this so that Russia should do its part in this regard as an important step for world peace,” he added.

‘TÜRKİYE HAS NO EYES ON TERRITORY OF SYRIA’

Erdoğan said Ankara’s main contention is fight against terrorism in northern Syria, and signals that Türkiye is ready for operation against terror groups.

He reiterated that the U.S. continues to support terrorism in Syria.

“It is the U.S. and coalition forces that primarily feed terrorism in Syria. They did it brutally and they still do it. They did not get tired of it, and they also made the same feeding in Iraq. To whom? Again to terrorist organizations. If there is unrest in Iraq today, unfortunately, America lies behind it,” the president said.

Erdoğan stressed that Ankara is not eyeing Syria and that Syria’s territorial integrity is important to Türkiye.

“We do not have eyes on the territory of Syria because the people of Syria are our brothers. We have no such problem there. The integrity of their territory is important to us. The regime must be aware of this,” he noted.

Erdoğan said Ankara takes responsibility to solve the Syrian problem for regional peace, and to protect Türkiye from threats, adding: “We need to know and accept this for once. Political dialogue or diplomacy between states can never be cut off. There are always these kinds of dialogues, there should be.”

He also said Türkiye is in contact with Russia on every step it takes in Syria.

‘PEOPLE OF EGYPT OUR BROTHERS’

About the relations with Egypt, Erdoğan said Türkiye continues its contacts with Cairo at the level of ministers.

“We hope that we can take this step at the highest level in the best way possible because the people of Egypt are our brothers. It is not possible for us to be offended with the Egyptian people,” he said.

Diplomatic relations between Türkiye and Egypt are maintained at the level of charges d’affaires in both sides since Egypt’s 2013 military coup which overthrew elected President Mohammed Morsi.

Regarding Türkiye’s fourth drill ship Abdulhamid Han, Erdoğan said: “This drill ship is currently among the few ships in the world. It is capable of drilling up to 12,000 meters (39,370 feet).”

On July 17, Abdulhamid Han started drilling in the Yörükler-1 well in the Mediterranean.

Turkish Petroleum Corporation and Malaysia’s Petronas are expected to take a joint step, he announced.

When Erdoğan was asked if joint exploration activities with Malaysia will be carried out in the Mediterranean or the Black Sea, he said “a different location,” without naming it.