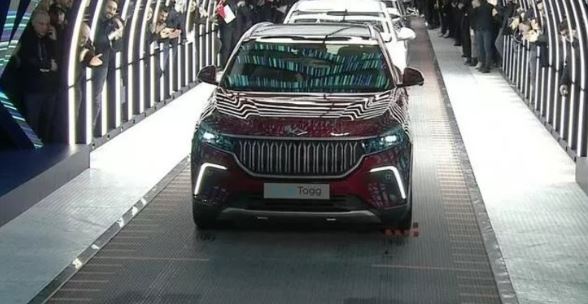 Attending the opening ceremony of the Togg Technology Campus, where the car will be mass-produced, Erdoğan took a test drive.

The C-SUV vehicle is expected to hit the market in the first quarter of 2023.

In June 2018, five industrial giants: the Anadolu Group, BMC, Kok Group, Turkcell, and Zorlu Holding as well as an umbrella organization, the Union of Chambers and Commodity Exchanges of Türkiye, joined hands to create TOGG.

TOGG will produce five different models-SUV, sedan, C-hatchback, B-SUV, and B-MPV-until 2030 and own their intellectual and industrial property rights.

In addition to engineering, design and production facilities, Europe’s cleanest paint shop will also be located in the Gemlik Campus, where Turkish auto manufacturer Togg’s electric car will be mass-produced.

The car was designed by Italy’s Pininfarina design company, which has created models for Ferrari and California-based electric carmaker Karma.

Togg has chosen advanced lithium-ion battery technology company Farasis as its business partner for the battery. The vehicle is projected to reach 80% charge in under 30 minutes with fast charging.

The track tests showed it will take the car about 7.6 seconds to speed up from zero to 100 km/h with 200 horsepower, and under 4.8 seconds with a 400-horsepower engine.

The vehicle will be constantly connected to the internet via 4G and 5G.

Togg became the first Turkish brand to receive an iF Design Award in 2021, one of the most prestigious design awards in the world, with its C-SUV model.

The indigenous car will also be supported by the government with tax discounts and incentives.