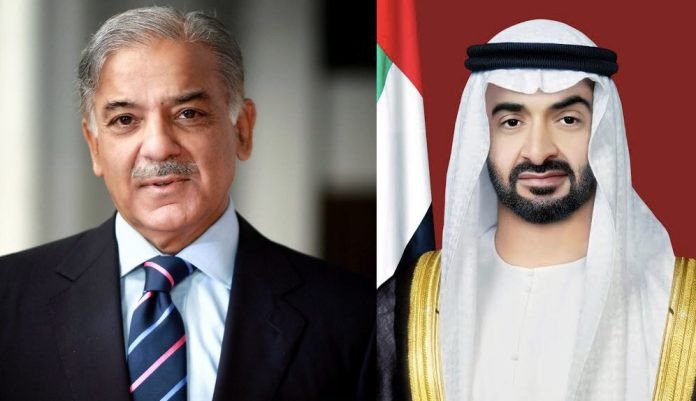 During the telephonic conversation, the two leaders exchanged views on matters of common interest. Reaffirming the close fraternal ties between the two countries, they agreed to work closely to further enhance bilateral cooperation in different fields.

The Prime Minister offered his condolences on the damage caused by the recent floods in the Emirates, resulting in the loss of precious lives including Pakistani nationals. He also expressed his deepest sympathies with the Emirati brethren.

The UAE President also extended heartfelt commiserations on the loss of precious lives in floods in Pakistan as well as on the sad demise of army personnel in the recent helicopter crash.

Recalling the decisions taken during the visit of the Prime Minister to the UAE in April 2022, the two leaders reviewed the progress and resolved to further strengthen trade and economic ties, with particular focus on accelerating cooperation and building partnerships in areas comprising investments, energy, and infrastructure.

Highlighting the generous support extended by the UAE to Pakistan over the years, the Prime Minister welcomed the recent announcement by the UAE to invest US$ 1 billion in various economic and investment sectors in Pakistan.

Pakistan and the UAE enjoy close fraternal ties which are rooted firmly in common belief and shared values and culture. The UAE is Pakistan’s largest trading partner in the Middle East and a major source of investments, and hosts more than 1.6 million Pakistanis.