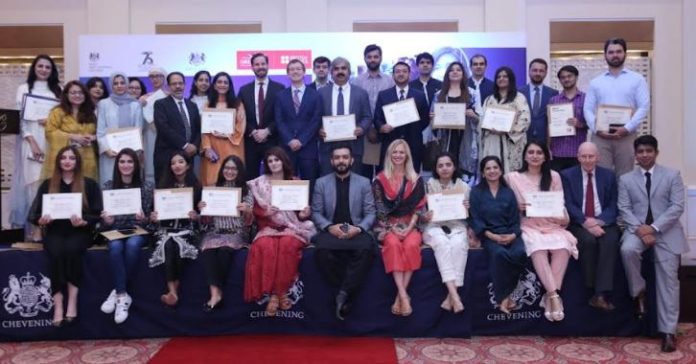 LAHORE, SEP 2 /DNA/ – British High Commission in collaboration with the British Council hosted a reception in Lahore to mark 75 years of UK-Pakistan relations, on Thursday to announce 75 scholarships for Pakistanis to study in the UK.

Taking place on the same day that the UK announced an uplift in Pakistan flood relief funding, taking the total amount pledged to £16.5m, the scholarships will provide future Pakistani leaders with the skills necessary to tackle global challenges.

Alex Ballinger in his address acknowledged the significant contribution of Pakistan’s Chevening alumni in the flood relief efforts, from carrying out fund raising to distribution of essential items. While addressing the audience he also reiterated the UK’s commitment to support Pakistan:

“We are with the people of Pakistan at this terrible time. We have all witnessed the devastating impact of these floods which have displaced millions of people and left much of Pakistan submerged. I’m pleased that on the same day the UK has pledged a total of £16.5m in flood relief funding, we can also announce 75 new UK scholarships which will play a vital part in allowing Pakistan to rebuild by investing in its people.”

This year the UK, we will be awarding 63 Chevening scholarships and fellowships along with 12 GREAT scholarships. As with all UK scholarship programmes, the British High Commission will be aiming for gender parity, with at least 50% of the scholarships being awarded to female candidates.

The British High Commission will continue to commemorate the 75th Anniversary of UK-Pakistan relations with a series of events and activities through the rest of the year. The application window for Chevening’s one-year master’s scholarship is open until 01 November 2022.=DNA