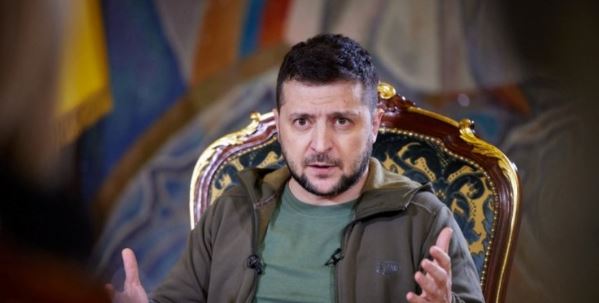 KYIV, NOV 15: The president of Ukraine proposed a set of 10 solutions on Tuesday to end the war with Russia.

In a video address at the G-20 summit in Bali, Indonesia, Volodymyr Zelenskyy highlighted the danger of radiation and nuclear safety under his first proposal, during which he emphasized that “no one has the right to blackmail the world with a radioactive disaster.”

“Russia has turned our Zaporizhzhia Nuclear Power Plant into a radioactive bomb that can explode at any moment. Where will the radiation cloud go? Perhaps towards the territory of the EU. Maybe to Türkiye. Maybe to the Middle East.

“I consider even a hypothetical possibility of such a scenario as criminal,” Zelenskyy said, demanding the withdrawal of Russian forces from the facility and the transfer of its control to Ukrainian and IAEA personnel.

In his second proposal that underlined food security, thanked Türkiye, the UN, and other partners for restoring the Black Sea grain initiative, from which Russia had withdrawn on Oct. 20 but later re-entered thanks to Ankara’s diplomatic efforts.

Zelenskyy noted that the grain initiative deserves an “indefinite extension” irrespective of the war, arguing that “the right to food is a fundamental right of every person in the world.”

“Ukraine can export 45 million tons of food this year and let a significant part of it be directed to those who suffer the most. What do we propose, exactly? Each country can join with a specific contribution and become a co-creator of the victory over hunger and the food crisis,” Zelenskyy said.

The third proposal mentioned by Zelenskyy was related to energy security. Accusing Russia of turning “the cold into a weapon,” he noted that about 40% of Ukraine’s energy infrastructure was destroyed by Russian missile and drone strikes.

“If Russia is trying to deprive Ukraine, Europe, and all energy consumers in the world of predictability and price stability, the answer to this should be a forced limitation of export prices for Russia, so that the export price was not higher than the production cost. That’s fair. If you take something away, the world has the right to take from you,” he asserted.

Other proposals by Zelenskyy include an “all-for-all” model for the release of prisoners and deportees, the implementation of the UN Charter and restoration of Ukraine’s territorial integrity, the withdrawal of Russian troops and cessation of hostilities, as well as the establishment of a “special tribunal” and an international mechanism of compensation for all the damages caused by Russia in the war.

The creation of a platform to assess the environmental damage of war, the holding of an international conference to cement the post-war security architecture in the Euro-Atlantic space that includes guarantees for Ukraine, and the signing of a document confirming the end of the war once all “antiwar measures are implemented” was also proposed by Zelenskyy.

“I have outlined specific, practical solutions. They can be implemented. Quickly. They are effective. And if Russia opposes our peace formula, you will see that it only wants war,” Zelenskyy concluded.